“Follows the usual formula for these Crosby-Hope road movies.”

In Melbourne, Australia, at the turn of the twentieth century, two fast-living American song-and-dance men, Harold Gridley (Bob Hope) and George Cochran (Bing Crosby), flee the stage in the middle of their act as they’re chased onto a train by the fathers of the girls they were romancing who want a shotgun wedding. The two entertainers will end up in Port Darwin, dressed in bushy beards. At an employment agency, the desperate men get a job no one else wants diving for Prince Ken Arok’s (Murvyn Vye) sunken treasure. They will soon learn there’s a giant, man-eating squid at the sea’s bottom guarding the treasure. It’s a job that has already killed four men. During their deep-sea diving expedition in the South Pacific, they meet the pretty Princess Lala (Dorothy Lamour). She likes Bing more, but feels empathy for Hope because he reminds her of a chimpanzee she befriended as a child. The tribal chief (Ralph Moody) tells her she can marry both.

There are five songs by Johnny Burke and Jimmy Van Heusen (“Chicago Style,” “Moonflowers,” “Hoot Mon,” “To See You” and “The Merry-Go-Runaround”), lush photography of the studio sets and the usual absurd story line. In other words, it’s the usual vulgar Crosby-Hope road film, with more than its share of lame jokes. The duo seem like tired travellers at this late stage of their road movie assault. The film is helped by some celebrity cameos from the likes of Jane Russell, Humphrey Bogart and Dean Martin and Jerry Lewis. 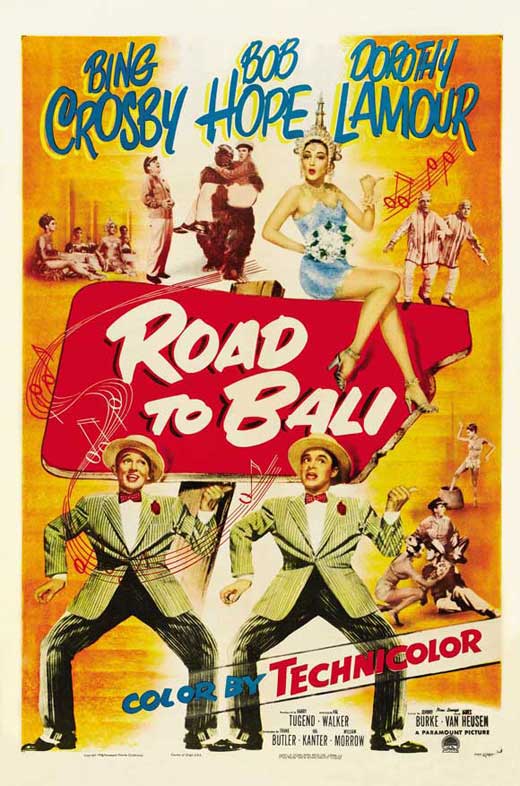