Producer Guillermo del Toro of this derivative psychological thriller and director of “The Devil’s Backbone,” has a strong influence on the debut directorial effort by Juan Antonio Bayona. It’s a classically styled ghost story written by Sergio G. Sanchez in the tradition of The Sixth Sense, The Others, The Haunting and the Spirit of the Beehive. It tries to make believers of even doubters in such hokum ghost tales, and uses the intense performance by Belen Rueda as its strongest argument. But heart alone is not enough to be convincing.

The film is set in an abandoned orphanage by the beach, where orphan Laura (Belen Rueda) lived before she was adopted as a 7-year-old. Now the 37-year-old Laura and her loving husband Carlos (Fernando Cayo) purchase the property in order to turn it into a home for children with special needs. The couple live there with their adopted 7-year-old son Simon (Roger Princep), who converses with imaginary friends Watson and Pepe in this isolated seaside estate and doesn’t know he’s adopted or is HIV-positive. One day Simon, who meets another imaginary friend named Tomas, a sinister lad wearing a sack-mask, vanishes without explanation while going on a treasure hunt to a sea cave with his new friend while a lawn party for potential children recruits to the former orphanage, all suffering from Downs Syndrome, is taking place. The more practical-minded Carlos relies on the police to solve the mystery, as police psychologist Pilar (Mabel Ribera) is prominent in the investigation. Laura, on the hand, who is greatly pained over her son’s disappearance, hysterically believes the spirit world has taken her child and after Simon is missing for 9 months consults a medium named Aurora (Geraldine Chaplin) to infiltrate the other world and she goes into a monitored trance to bring on supernatural forces. With that, Laura follows the medium’s questionable advice and allows her pain to guide her to find her son in the other world, as the medium tells her: “Your pain gives you strength; it will guide you. Seeing is not believing — it’s the other way around.”

The film is meant to be scary and evokes chilling images of an extinguished lighthouses, Peter Pan allusions, a secret sea cave, a haunted house, the appearance of a menacing elderly social worker (Montserrat Carulla) who once worked briefly at the orphanage and is still nursing bad feelings that her son was accidentally killed by the orphanage residents, the reappearance as ghosts of the children Laura once played with in the orphanage and secrets held in locked boxes. It suggests a ghost might be an echo, of pain and loss, that needs to be recovered before one can move on again. It turns into a tale about dark secrets released with terrible after-effects and how transient is life. The torn heroine tries to deal with love, loss and guilt, as she retreats to the past to see if she can reunite with her lost child or lost childhood. The heart of the film has Laura ‘back in the past’ remembering the fun she had playing with the other children and how sad they were at her leaving.

Though it’s a beautifully crafted and well acted film (at least by Rueda, Cayo’s part was undeveloped)that sets an intelligent tone and avoids gratuitous violence, it never made me believe for a sec it was not nonsensical or had much to say that meant something. It played at Cannes, at the Toronto and New York Film Festivals. 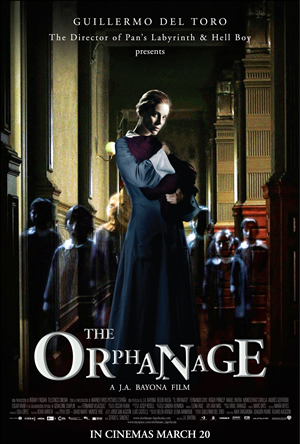