“A road movie that plays out as a restrained human drama, that’s mysterious and keenly observant.”

A road movie that plays out as a restrained human drama, that’s mysterious and keenly observant. It explores a fragile father-son relationship, and is filled with long silences, long shots of the bleak Russian landscape and stunning imagery. It’s the auspicious feature film debut of the Russian writing/directing team of Boris Khlebnikov and Alexei Popogrebsky. One can compare it favorably to Alexander Sokurov’s exploration of the same father-son bonding theme in his more lyrical Father and Son. The film won the Moscow International Film Festival.

A widowed father (Igor Csernyevics) in his late thirties leaves his engineering job and his dark past, and sets off on a country road from Moscow with his 11-year-old son (Gleb Puskepalis), with both wearing backpacks, for his sister’s home in Koktebel (its Russian name Planerskoye translates to mean the unusual air currents in the area that deem it ideal for air gliding), a resort town some 200 miles away by the Black Sea in Crimea. It’s never explained why someone in Russia would leave such a good job for an uncertain future, but seemingly it’s to piece together the father’s broken life and for the withdrawn but curious son to come to understand his down-and-out college educated father better. They travel with little money and with no means of transportation. After removed from a freight train by a railroad yard worker but treated humanely, they walk on foot and secure a job repairing a roof on a country cottage for an old retired army officer named Mikhail (Vladimir Kucherenko) with a nasty disposition. After cajoled into a night of drinking with the embittered old Stalinist, the alcoholic father’s return to drinking has bad results. The crazed drunken ex-officer won’t pay for the roofing job and instead accuses him of stealing his money. It results in the father taking a rifle shot in the shoulder. The pair of unfortunates meet up with a lonely woman doctor Xenia (Agrippina Steklova), who treats the wound and begins a romance with her patient. The kid is upset by this romance and goes on his own to his aunt’s house. He gets a ride with a truck driver, who looks like a monster but has a kind heart.

Its main problem, at least for me, is that after we get to where we are going, to the mythical sea, we still are left in the dark about what it all means except for the obvious: there’s hope in starting over in new surroundings. Yet there’s a raw power to connecting the harsh landscape to the tough lives of the struggling Russian people, undergoing another regime change from old guard Communism, as the film upon closer examination might be deeper, more political and even more mysterious than it first seems. 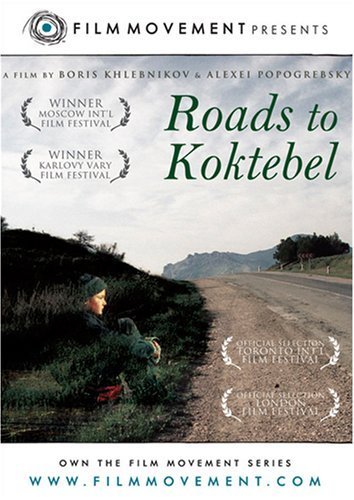