“A powerful sociological film on white teenage alienation in small-town America, that is even more amazing that it’s based on an actual event.”

A powerful sociological indie film on white teenage alienation in small-town America, that is even more amazing that it’s based on an actual event taking place in Milpitas, California, in 1981. The masterful screenplay by Neal Jimenez asks the right questions about the morality breakdown crisis in modern America and rightfully suggests there are many answers to what went wrong, and most are not pretty. Former screenwriter Tim Hunter (“The Saint of Fort Washington”/”Control”/”Paint it Black”), in his feature film debut as a director, has a handle on both the uncaring misfit teens and the odd group of adultswho can’t reach the kids whether an earnest former Vietnam War protester hippie teacher (Jim Metzler) trying to get the students to care about the world, a bullying detective hated by the teens or the hapless neglectful parents the kids don’t respect and argue with.

Set in an unnamed rural town in Oregon, it opens with the undisciplined 12-year-old Timmy (Joshua Miller) spotting his stoner high school brother Matt’s (Keanu Reeves) obese friend Samson (Daniel Roebuck), standing by the river’s edge over the nude body of Jaime (Danyi Deats), a girl from his inner circle he just strangled to death because she spoke ill of his dead mom. When Timmy follows Samson into town, he steals a few beers from a convenience store for the thirsty killer, who was just refused the brew because he was under-aged, and tells him what he saw at the river’s edge and is only concerned if he could score some dope. The emotionally bankrupt Samson, who doesn’t care who knows he’s a killer and expresses no remorse, takes the kid to the home of a weed smoking drug-dealer ex-biker from the 1960s, Feck (Dennis Hopper), who lost a leg in a motorcycle accident and has been hiding out in his secluded home, not going outside for five years, because he killed his beloved girlfriend. To compensate for the loss, Feck has a loving relationship with a human-sized blow-up doll named Ellie.

The leader of Samson’s clique is Layne (Crispin Glover), an idler speed-freak, who after the entire teen clique view the corpse, anoints himself in charge of the operation of making sure the clique support Samson and no one turns him in. Layne reasons they can’t help Jaime anymore, but they can still help her callous killer. Layne plans his escape to a city like Portland, but his friends are even too apathetic to fully help in that effort. In fact, the only one who gives a shit about Samson is the crazed Layne. Not one of the many teens who view the dead body call the police, until Matt has guilt pangs and calls the next day. For his trouble, Matt is grilled by the detective and disrespected, making him regret his decision. Matt finds solace by camping out all night in the city park with classmate Clarissa (Ione Skye Leitch) and quickly forgets about the dead girl. Meanwhile the cops pursue John, and the press covers the story aiming to get headlines why the monster teens supported the killer of a girl they all liked.

The pic might be bleak and chilling but the cast consisting of its lone established star Dennis Hopper and the rest all unknown teens, bring to life with conviction their dismal characters and the pic is a riot though never making light of the tragic situation. It’s a marvelous youth film, one that hits the audience right in their guts. The film’s highlight is the brilliantly mercurial performance by Glover, who outshines the psychopathic characters Hopper and Roebuck play in crazy and is more lovable than any of the other monsters in the film. 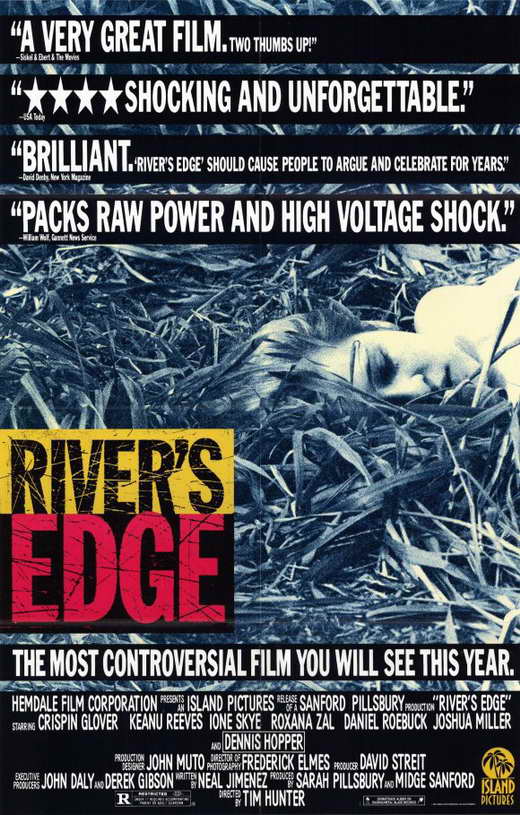