The River is based on Ms. Rumer Godden’s perceptive coming-of-age semiautobiographical tale of first love. It centers around the sensitive plain looking 12-year-old girl, Harriet (Patricia Walters), living an idyllic life in colonial India until the graceless girl experiences pangs of love. Harriet’s the oldest child of her middle-class jute mill manager father and kindly pregnant mother (Esmond Knight & Nora Swinburne), who seem remote to their flock. The other members include Harriet’s elementary school-aged animal loving brother Bogey (Richard Foster), the even younger sister Victoria, and her youngest twin sisters, who are viewed as a contented English family dwelling in Bengal on the banks of the Ganges with a few servants who love being servants.

Celebrated French filmmaker Jean Renoir (“The Elusive Corporal “/”The Little Theatre of Jean Renoir”/”The Southerner”), son of the famed Impressionist painter Auguste, directs his first film in color in this sumptuous visual treat and is cowriter with Godden (she is the writer of Black Narcissus). The subtle film, shot in a semi-documentary style, elegantly moves from being a richly symbolic poem (using the holy river to make its deeper points about how life is cyclical with destruction being necessary as a prerequisite to creation and how everything moves according to nature) to a travelogue evoking the rich spiritual climate of the country to an affecting fantasy tale of a young girl growing up during an eventful fall season and looking back on that experience as a teenager by offering a narration about her growing pains (June Hillman, only the voice–she’s never seen).

Three young girls — two British, the beautiful red-headed but precocious only child of a wealthy family, Valerie (Adrienne Corri), and Harriet, the insecure over her ordinary looks but awakening to love pangs for the first time poetry writing and diary keeping young lady, and Melanie (Radha Shri Ram), a slightly older and less flighty sullen half-Indian sari-wearing girl schooled in a western convent with a loving mushy Brit father and a beloved deceased Hindu mother — grow up together in Bengal after WW II and hang out in Harriet’s Eden-like garden with her family’s outspoken and loyal native nanny Nan (Suprova Mukerjee). Things change for the innocent girls when a dashing young American war hero with one leg, who is embittered over why he lost his leg and is going through a stage of brooding and soul-searching, Captain John (Thomas E. Breen), arrives to visit his uncle, Melanie’s father (Arthur Shields), who is Harriet’s nearest neighbor. The three girls all have a crush on him and their lives are thrown into an emotional tizzy as they try to catch his attention and he battles to find himself.

The River works fantastically well as a beautiful meditative study, shot deliciously on location, on a way of life that once flourished but no longer exists (it catches the last breathes of the Raj). It suffers only when compared with Michael Powell’s studio-shot Black Narcissus, that hits on some of the same terrain but manages much smoother performances, a more erotic story and a smarter melodrama (serving up India as a state of mind rather than the real place The River drifts off to). But it’s interesting to note that writer Rumer Godden preferred The River and was very unhappy with Powell’s interpretation of her material.

Renoir was pleased with the location shoot and that there was no interference from producer Kenneth McEldownery (a Beverly Hills florist). Of his experience in India, Renoir said: “India brought me many things by way of The River. India brought me a certain understanding of life. This doesn’t mean I understand everything, it doesn’t mean I know all the answers, it simply means that I rid myself of quite a few prejudices. India may have taught me that everyone has his reasons.” 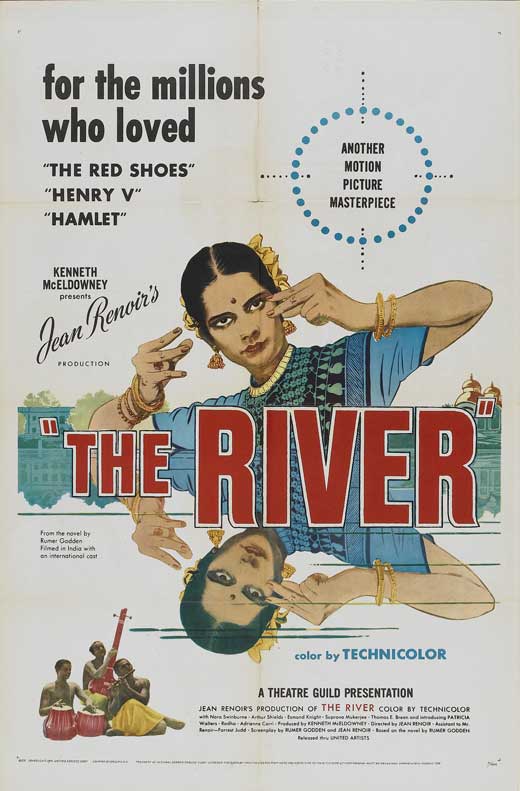