The engrossing fast-paced black and white Gothic horror thriller was released in the US in 1965 as Dark Eyes of London and was helmed by Alfred Vohrer (“Everyone Dies Alone”/”The Squeaker”/”The School of Fear”). The original version starred Bela Lugosi and was directed by Walter Summers, in 1939, and was called The Human Monster. There’s also a third version released in 1968 that was also directed by Alfred Vohrer. The Rialto series had Vohrer film 14 Edgar Wallace novels.

In this second version, probably the best in the series, Vohrer offers a much more complex plot than the film’s original version. It’s based on the 1924 Edgar Wallace novel, The Testament of Gordon Stewart. The screenplay is by Egon Eis.

Colorful characters (like a Scotland Yard sergeant (Eddi Arent) who happily knits), a lot of violence uniquely played out (such as a death through an elevator shaft, a TV that fires bullets and a skull used as a cigarette dispenser). Meanwhile Beethoven’s 5th symphony is played to accompany all the deaths by torture and mayhem, there’s a spicy sense of humor and a convoluted plot.

Klaus Kinski, wearing dark sun glasses, offers his usual chills playing Judd’s slimy assistant. Nora Ward (Karin Baal) is the attractive young nurse working in the soup kitchen home for the blind run by the sinister blind Reverend Paul Dearborn (Dieter Borsche). She doesn’t realize her wealthy old father was one of the dead men killed and has been left a generous inheritance. This means her life is in danger, as Holt is her best hope for survival. 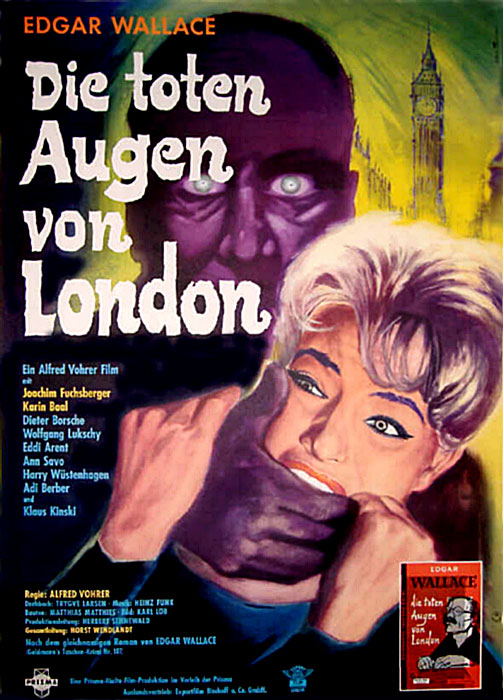