This irresistible b/w shot black comedy was Italian filmmaker Marco Bellocchio’s(“Fist in the Pocket”/”Vincere”/”In The Name of the Father”) second feature film. It uses the family metaphor to advance its agenda of the way society functions in a bourgeois state, even for a progressive family. It’s based on a story Bellocchio wrote. The director and the actress Elda Tattoli wrote the script for this smart scathing satire on modern-day sex and politics.

The wealthy land-owning potbellied professor VittorioGordini Malvezzi (Glauco Mauri) is running as a Socialist for city office. His sexually liberated sister Elena (Elda Tattoli) refuses marriage with any of her many sexual conquests because they are of a lower class. Vittorio’s younger 17-year-old prissy brother Camillo (Pierluigi Aprà), an avowed Maoist, does what he can to interfere with his brother’s campaign.

Meanwhile the dullard professor’s secretary Giovanna (Daniela Surina) and, a Maoist student, Carlo (PaoloGraziosi), are having an affair. The cynical working-class lovers are scheming to marry into the wealthy family. Carlo is the political manager of Vittorio, and Elena has fallen in love with him.

Though no one is likable and the drama goes on for too long, Bellocchio’s caustic take on the effete upper-class family featured and the loveless ambitious working-class couple is unrelenting in its contempt for them.

It won the Special Jury Prize in Venice. 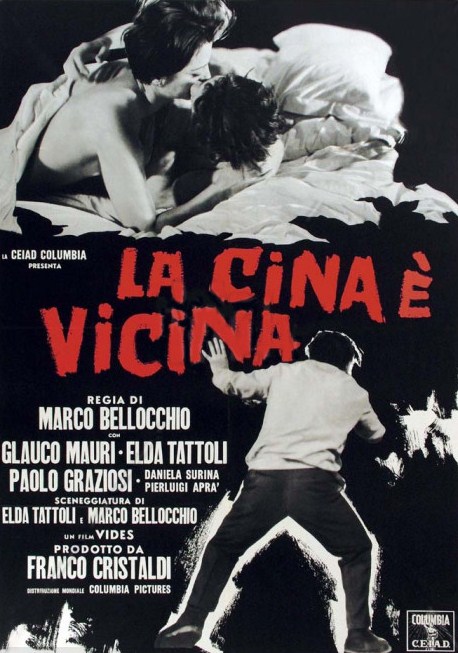