“The film’s only purpose seems to be to come up with as many ludicrous plot twists as possible.”

How the mighty have fallen! John Frankenheimer was once recognized as a quality filmmaker capable of making great paranoid thrillers (The Manchurian Candidate), but who has slipped off the precipice of reliability and is now reduced to making films like this. It’s a nonsensical, exploitative actioner, whose best selling point is that it has a bleak metallic snowy look to it. It is made as if to bypass movie houses and go straight to video rentals. There is no filmmaker armed with this script, who could have salvaged this film (Well! replacing Affleck as the lead couldn’t have hurt in immediately improving it. He didn’t fit the part, looking more like spoiled collegian than a thug).

The film’s only purpose seems to be to come up with as many ludicrous plot twists as possible and see if anyone in the audience can guess how it will work itself out. The violence is gratuitous and in the last 20-minutes or so, the story proves itself to be an insult to one’s intelligence. The characters became gradually less and less human as the twists kept piling up. The shame of this film is that it was oddly enough entertaining for long stretches, as it passed for being a diverting actioner.

Reindeer Games is shot in British Colombia but set in Michigan; the movie is from an original story written by Ehren Kruger (Arlington Road/Scream 3), about an ex-con being forced into participating in a casino robbery.

Rudy (Ben Affleck) and Nick (James Frain) are cellmates, both getting out in a couple of days. Rudy was in five years for auto theft and Nick three years for manslaughter; he killed someone trying to defend his girlfriend from being attacked. Nick has a pen pal relationship with a girl named Ashley (Theron), who will meet him outside the prison when he gets out. Nick’s cell is filled with photos of his glamorous pen pal and he has talked with Rudy about her for some time now, even sharing with him the intimate letters she wrote.

A prison fracas develops and a prisoner shanks Nick to death, as Nick comes too late to the rescue of Rudy. When Rudy gets out he sees Ashley waiting by the prison gates and sees for himself that she is the fine looking babe he saw in the photos, so he decides to tell her that he’s Nick. To say that this film had holes in the script and that everything about the story could be challenged, goes without saying. Just to show you what I mean, Rudy would have to wonder or at least have some suspicion why Ashley did not receive by now a photo of Nick and did not visit him in prison.

After the couple returns to the motel they rented for a round of lovemaking, Rudy discovers what a dangerous mistake he made replacing Nick when Ashley’s sinister brother Gabriel (Sinise) and three other armed thugs of his gunrunning gang show up and beat him for violating his sister. They were led to believe by Ashley that Rudy used to work in an Indian casino in rural Michigan–you see, they think Rudy is Nick. Gabriel forces Rudy to tell him about the casino’s security setup; but, Rudy, says he isn’t Nick. But he then says he is Nick, after the gang threatens to kill him for not being Nick. Gabriel has a confused look at all this indecision, and keeps deciding whether to kill him or not. This little ploy will go on for the remainder of the film, as Rudy is sometimes Nick and sometimes he’s just plain Rudy. Though by being Nick, which is the name he will use for most of the film, he at least gets to remain alive.

If you think you have seen all the plot twists, let me warn you, that’s just the beginning of all the surprises. The more of them there are, the less sense the film seems to make. John Frankenheimer moves the action along at breakneck speed but the more the characters try explaining the ever-changing situations, the more ridiculous the explanations become.

The casino robbery on Christmas Eve starts the lowlights of the film rolling as the gang, along with Rudy, are disguised as five Santas, and they will soon fill the Michigan snow with enough blood to satisfy a big city blood bank for years. Then the film tries to pull a complete 360 degree reversal and end on a note of Christmas cheer, since I think this is supposed to be some kind of Christmas story. What disturbed me more than anything else is its senseless violence and its need to grovel at the feet of vulgarity, whether for an obligatory nude shot of Theron or to try and clean up the mess it made with some false Christmas cheer. It seems to want to spread its desperate gloom over everything it can touch.

The inconsistencies of Frankenheimer as a director is amazing, as he could still shoot a scene that is mesmerizing (the one on the cracked ice with Affleck jumping into the chilly water to save Theron) and then would follow with one that is dopey (machine-gunning warfare in a casino that looks more like a supermarket than a casino). 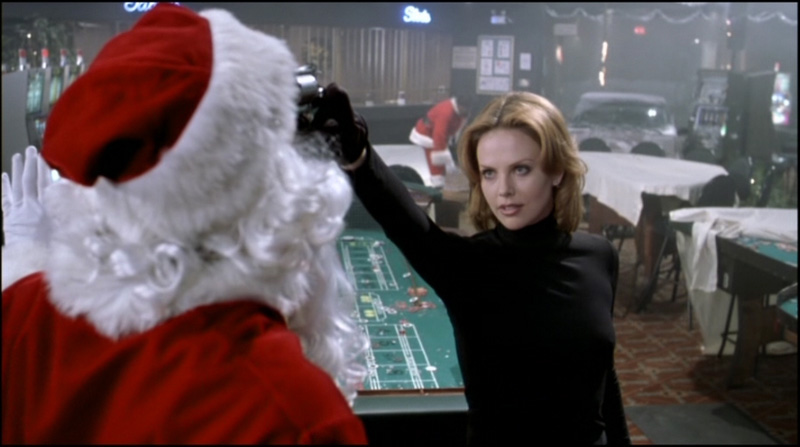