It’s co-written and directed byScott McGehee and David Siegel (“Suture,“/”The Deep End“/”Bee Season”). The film was ad-libbed, and filled with tasty location shots of the Big Apple. The result is a gimmicky craftsman type of pic that takes us into Blind Chance/Sliding Doors styles, giving us two parallel stories that possibly merge into one. But the gimmicky filming technique backfires, as it ruins what potentially could have been an involving tale if shot in a conventional format and not needlessly left so oft-putting by relying totally on unconventional filming.

On July 4, Canadian musician Bobby Thompson (Joseph Gordon-Levitt) and his Argentine-American girlfriend dancer Kate Montero (Lynn Collins) are indecisive about how they wish to spend the holiday. While on the Brooklyn Bridge they toss a coin to decide on whether to spend the holiday with Kate’s traditional family or wing it for a spontaneous adventure. Thereby we are given two alternative stories.

In Manhattan, the couple find a smartphone in the cab and get mixed-up with Russian mafia types when do-gooder Bobby leaves his cell number for the phone return instead of leaving the lost phone with the cabbie. Things get tense when someone retrieving the phone is murdered outside a Chinatown restaurant and the rival gangster offers $500,000 for the phone, which probably has vital info downloaded. The thug threatens to kill Bobby if the phone is not returned or if he goes to the police. As a result, the couple go on the run through Chinatown and City Hall areas from the pursuing gangsters. The other story takes place on the Brooklyn side of the bridge, where the couple attends Kate’s family cookout and she refuses to tell her caring but uptight mom (Assumpta Serna), someone she has an edgy relationship with, that she’s pregnant but tells her younger sister (Olivia Thirlby) and brain-damaged ex-boxer uncle (Louis Arcella). The other excitement about the visit is that the couple visit with a stray dog just found on Jamaica Boulevard.

The drama that wants to say something smart about decision ran too long and never generated enough interest to care about the outcome of either of its stories. The dull domestic story just sat there like flat soda, while the thriller chase story seemed devoid of thrills. The filmmakers cared more about their gimmicks and keeping the film as an acting exercise.Though they got a terrific performance by Levitt, that just wasn’t enough. 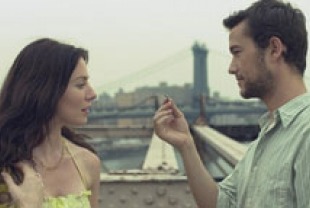