“If you see it, it should be only for the wonderful solo violin of Joshua Bell.”

It is difficult to fall in love with a material thing like a violin, except when it is played as beautifully as it is by solo violinist Joshua Bell. Esa-Pekka Salonen conducts the London Philharmonia Orchestra, playing John Corigliano’s score, which adds to the film’s musical richness. When the music they play stops and the story begins, that is where the problem lies for this very awkwardly told arty story. Its ill-conceived plot is so sloppily directed and the story is so trite, that it was a very trying experience just to try and figure out what the director was trying to say about the violin that made him think that this story was so mysterious and worth telling. The film is about the changing ownership of a red-stained violin (stained with the blood of the violin maker’s dead wife) and that it leaves a curse on those who own it. The main excitement centers around it being auctioned off and sold in Montreal for a whopping sum of over two million dollars after traveling through several countries and centuries, but this does not make this tale rise to the level of exhilarating suspense.

The film tells the fictionalized account of a great 17th-century violin maker in Cremona, named Nicolo Bussotti (Cecchi), who has made the perfect violin for his expectant son. His wife’s servant Cesca (Laurenzi) reads the tarot cards and sees in them the future, predicting a tough delivery for the mother but a long life. But the mother dies at childbirth and the long life the tarot will refer to, is for the red violin. We will repeatedly return to the five cards turned over in the tarot for updates on the uncannily accurate predictions made. Over the time frame of three-centuries the violin makes its way from its creation in 17th-century Italy to 18th-century Austria to a tribe of gypsies to 19th-century England to the 20th-century Communist China and, finally, to contemporary Canada. Each century is a primer for relating the current society’s love for classical music compared to the love shown for it by the violin’s creator.

All the vignettes involving the violin changing hands in different countries made me cringe with embarrassment, as the tales were so devoid of any logic and so ridden with clichés.

In the first vignette, a fragile child prodigy, Kaspar Weiss (Christoph Koncz), raised by monks in Austria, is turned over to a violin tutor (Jean-Luc Bideau) who teaches him to keep musical time with a metronome. The child sleeps with the red violin and dies in a swoon at an audition that would have given him a chance to become famous.

A ludicrous vignette takes place in England as its greatest violinist, the egotist Frederick Pope (Jason Flemyng), composes great compositions playing the red violin while his girlfriend, Victoria (Greta Scacchi), makes love to him in different gymnastic positions. What could this team of writer and director have been thinking about? It is hard to believe that this is the same team that made the very inspiring “Thirty Two Short Films About Glenn Gould.”

The scenes in Shanghai during Mao Tse-tung’s Cultural Revolution, in which Western culture is demonized and its books and musical instruments are unceremoniously tossed into a bonfire, are flatly done. Sylvia Chang is featured as a leader in the Cultural Revolution spouting dogmatic propaganda, but who hides the red violin given to her by her bourgeois mother from her own party members. This vignette left no lasting impression on me, except as a further illustration of how the story got the costumes right but distorted the historical events.

The film lost all track of itself in these tedious vignettes, so much so that it has no chance of ever uncovering what it probably wanted to show: of how the universal message of music brings harmony to the world and how it transcends all cultures and kinds of people.

The most tawdry scene is saved for last as a rude and corruptible New Yorker, Charles Morritz (Samuel L. Jackson), is in Montreal working for an auction house to restore and appraise the worth of the violin and ends up authenticating the legitimacy of it. If that was all he did it would have been enough and perhaps the film could have ended with some dignity, and the music presented would have left a big enough impression so that the film could at least be worth seeing for that. But, no! For some unfathomable reason, we are supposed to get worked up about a bidding war for the violin and who would possess this perfect instrument, when for the entire film there was not one person in the movie covered in enough depth in whom we could get emotionally involved with who possessed the instrument; and, to care at this late date about who owns this material object, when it has long since been viewed as a mere trophy just doesn’t make sense. That the one who does walk away with the trophy violin is the wrong person, only confirms my feeling that every judgment the director and screenwriter made about this film was a wrong one.

What makes this film seem worse than the usual Hollywood blockbuster, a film that it is most imitative of, is that it is presented as a high-brow art film and will draw its audience from those who see such films. It is done so pretentiously, lacking in any kind of subtle mannerisms and humor. It offers the viewer pretty costumes, but its high production costs to attain the accuracy of the story only resulted in kitsch art. If you see it, it should be only for the wonderful solo violin of Joshua Bell. 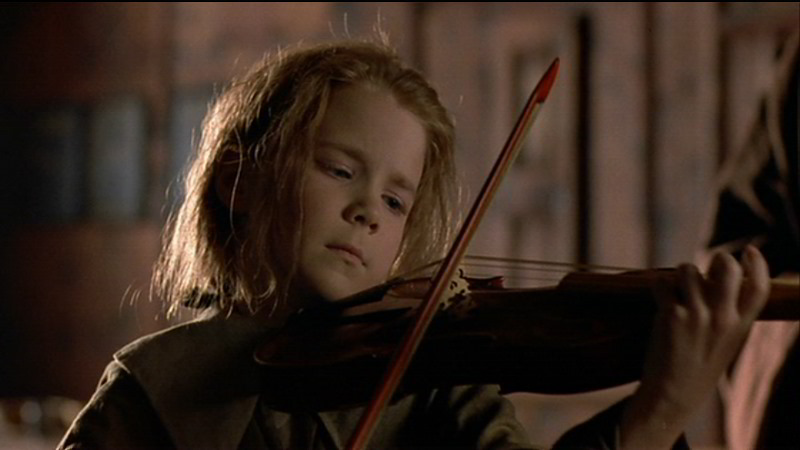