John Madden (“Shakespeare in Love”) directs this film adaptation of David Auburn’s Pulitzer-winning Broadway play and is able to get a finely tuned sensitive performance from star Gwyneth Paltrow (she played the same role on the London stage, which was also directed by Madden). Mr. Auburn and Rebecca Miller handle the serious screenplay that is certainly intelligent and well-realized but lacking much of an emotional charge. The title refers to a mathematical term that affects the family drama plot line; it also has the double meaning of showing one’s worth in everyday existence. This contrivance aims to show that the world of math can often be smoother than life. Also, to make it more movielike, the film has location shots around the University of Chicago.

Catherine (Gwyneth Paltrow) is a 27-year-old math prodigy who dropped out of Northwestern and for the past five years has been caretaker of her dementia suffering father Robert (Anthony Hopkins), a world-famous professor of math at the University of Chicago–specializing in number theories. Dad has died and the troubled Catherine finds herself confronting both her father’s work and her own confusing state of mind (fretting if she inherited her father’s mental illness).

The nerdy over enthusiastic but highly gifted Hal (Jake Gyllenhaal) is her father’s favorite student, now teaching at the University of Chicago, who starts going through the chaotic 103 notebooks from the math brain’s final years, hoping that there will be something there to advance math and give him a chance to publish something that will also advance his career.

Hoping to get the insecure, almost nutty, Catherine’s life back in order is the older shrill sis Claire (Hope Davis), who arrives for the funeral from New York with plans to sell the family house and to exercise control over Catherine’s life.

Catherine eventually shares with the two house intruders a notebook found inside the desk of her father’s that contains a complex discovery in the field of prime numbers. Catherine claims it’s her work but can’t prove that to the skeptical Hal and Claire, as the plot line revolves around its authorship.

This competent film wrestles with the thin line drawn between genius and madness, but remains far too tedious to be moving. The story unfolds through extensive flashbacks; unfortunately, it loses its tension once it’s learned who is the proof author. 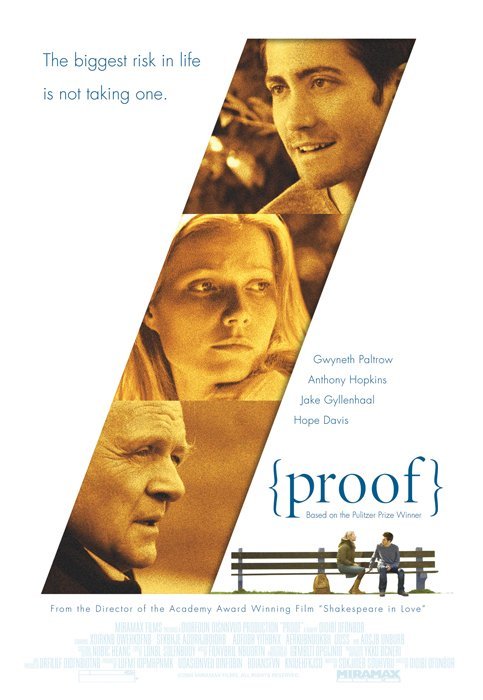