“Too bad no one told Dupieux that this pic is a bad idea before he got it green-lighted.”

A weird and unfunny comedy written and directed by the eccentric cult filmmaker Quentin Dupieux(“Wrong”/”Wrong Cops”/”Rubber”). It plays out as a valentine to grade-D horror films. I could never get a handle on its screwy humor. It fills the screen with a bizarre plot and many twists, odd characters and an attempt to apply dream logic to everyday reality. Things don’t make sense, which might be done on purpose. If that bothers you, you might want to avoid this challenging but nutty film.

The guy who played Napoleon Dynamite, Jon Heder, appears as an itchy character costumed in a rat suit while hosting a TV cooking show. Maybe some viewers might find it funny to connect a rat with a cooking show. I did. So I at least found something amusing here.

It alternates between French and English speak throughout, but sounded mostly Greek to me.

Jason is ambitious to be a movie director and comes up with an absurd idea for a sci-fi horror film. He pitches it to wealthy producer Bob Marshall (Jonathan Lambert), who promises to back the project if Jason in 48 hours can find an Oscar-worthy groan to insert into his film about killer TVs.

Then there’s the 8-year old schoolgirl Reality (Kyla Kennedy), the film’s titular character. It turns out that she’s starring in a film Bob is making as a fictional feature and it’s being produced by the documentary filmmaker Zog (John Glover). Also of note, Reality recovers a gore-spattered videocassette from a garbage can that her dad shot of a butchered hog and his entrails. Caught in school watching the tape, the principal (Eric Wareheim), Alice’s patient, punishes her. When in his therapist’s office, the principal tells about being a cross-dresser.

Anyhow, after a series of recurring bad dream, Jason awakens and is not sure if his film idea is based on a dream or reality.

Too bad no one told Dupieux that this pic is a bad idea before he got it green-lighted. 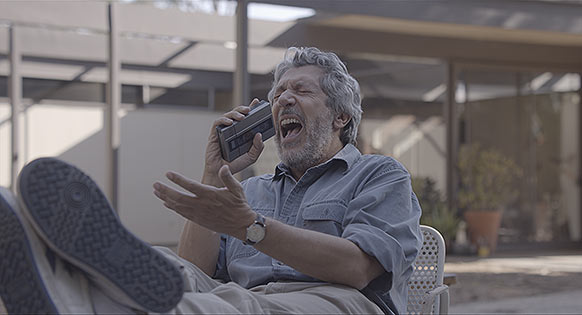 LODGER: A STORY OF THE LONDON FOG, THE