Sidney Salkow (“Robbers’ Roost”) directs an old-fashioned Western starring Audie Murphy. It’s a routine formulaic one of the gunslinger reforming after he uses his guns to fight the bad guys for one last time, proving to the town that condemned him that he’s not a bad guy. All the cowboy wants to do is work the ranch his recently deceased father left him and raise a family with the woman that he loves.

Clint Cooper (Audie Murphy) left his hometown of Shelby, Montana, with bad feelings two years ago when he was forced into a gunfight with Tom Morrison’s two sons and killed them. Though not charged with murder, most of the town folks never believed he was innocent and that the Morrisons were trying to steal his ranch. This forced Clint to become a hired gun (Don’t ask me why!), where he developed a rep as a fast draw. As he wearily returns from his nightmare he’s ambushed just outside of town by Spangler (Ted de Corsia), a former hired gun pal of Clint’s, who has gathered 15 guns together and plans to rob the Shelby bank and then pillage the town and rape the women. He suspects Clint has come here also to rob the bank, knowing that most of the men in town are away on a cattle drive and the bank is holding $100,000 of their cattle money. When Clint tells him he came for personal reasons Spangler holds him hostage, but Clint escapes and kills two of Spangler’s men in his getaway.

Clint’s met by hostility as he tries to warn the defenseless town. But Sheriff Scotty Grant (James Best) believes him and acts to set up a barricade with the few elderly men left in town. Meanwhile Clint meets his former nice girl sweetie, the school teacher Helen Reed (Merry Anders). But he has his heart broken when she tells him she’s going to marry Scotty next week. Deciding to help the town fight, after all, Clint’s nevertheless jumped by an unforgiving malicious Tom Morrison (Walter Sande) and his bloodthirsty nephew Rick Morrison (Rex Holman).

It builds to Spangler attacking the town and Clint being the only one left to defend the women and children when all the men are killed, except for the peace loving preacher. No surprises, as everything is vanilla as Audie proves himself once again in combat. 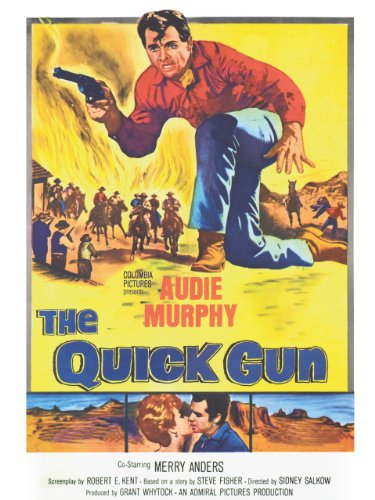