It was one of the first major-studio 3-D productions of the 1950s, and is based on a story by Ray Bradbury called “The Meteor.” The aliens in this 1950s sci-fi flick are nothing but giant, all-seeing eyes. This “third eye” can transform itself into an Earthling. They crash-land their ship in the desert of Sand Rock, Arizona, near a mine, and are spotted by an amateur astronomer, John Putnam (Richard Carlson), who at first thinks he came across a giant meteor. He’s first on the scene along with a helicopter pilot and his main squeeze, teacher Ellen Fields (Rush). They don’t go down with Putnam to the crater, and are therefore skeptical of what he says he saw. So when he tells them he saw an alien ship buried under the rubble and possibly some aliens they tell him to cool it, that he better not tell that to the others or else he’ll become the town laughing stock. But he tells the sneering sheriff, Matt Warren (Drake), and the press who interview him. He is, of course, mocked by both. The sheriff is an old friend of Ellen’s, and is very protective of her and wonders if she’s engaged to a decent guy. Since Putnam is an outsider and an intellectual and a liberal, he’s not warmly received by the intransigent locals. The newspaper suggests that he’s a publicity seeker, as they display this headline: Star Gazer Sees Martians.”

This flick shows how paranoiac and xenophobic the Cold War times were in America, and how hostile some could be to new ideas. The McCarthy trials of that time showed that the so-called super-patriots believed that the radical intellectuals were secretive and shouldn’t be trusted, that they are plotting to overthrow the country and should be considered as subversives. This is the same negative feeling that is directed Putnam’s way by the authorities when he insists he saw aliens. Because the aliens are invisible and since the locals don’t know what the aliens are up to, they assume the worst and blame the liberals like Putnam for defending them.

It turns out these aliens are really benign creatures, that they came here by error and are only interested in repairing their spaceship and making tracks for the long trip home. They seem to have no intellectual curiosity in studying the inferior humans. They tell Putnam when they make contact that they have souls and minds, and are superior to Earthlings.

All the town locals are hostile to the idea of aliens, as even the university astronomer, Dr. Snell (Eldredge), rejects Putnam’s request to dig through the debris and find the spaceship. But when two telephone workers, Frank and George, disappear, and then the aliens return dressed as them and act in a robotic way and speak in an emotionless voice and other townspeople also vanish as their likenesses are taken over by the aliens, then even the sheriff realizes that there might be aliens in town.

When the aliens snatch Ellen, Putnam seeks the aliens out and asks them: What’s up with the kidnappings? They ask for some time and no interference from him and the sheriff, or else they threaten to get real nasty and blow up the Earth. Putnam can accept that they are being straight with him, but the sheriff doesn’t trust aliens and rounds up his posse to attack them in the crater. It becomes Putnam’s role to prevent a possible tragedy.

The “real people” have been brought aboard the spaceship as hostages to reassure that there will be no interference from the townspeople. But the sheriff is all for blasting away at the aliens, as his ignorance is the prevailing mood of the town. But Carlson does everything he can do to stop him. He realizes that the aliens’ intentions are not harmful. The spacemen reward his trust in them by returning the “real” Ellen and the others in one piece.

The film came with all the familiar formula clichés from that genre and acting that was stilted, but the film did itself proud with some stunning visuals and uses the desert effectively as an alien landscape. The visuals were admittedly of the pulp kind, but the film had enough intelligence to make it an interesting watch. It also had some good energy and a rational argument for a more tolerant approach to deal with things we don’t understand. It ends on the cryptic note that we are not ready to meet the spacemen as equals. Jack Arnold also directed some other worthy sci-fi/horror films: Creature from the Black Lagoon in 1954 and The Incredible Shrinking Man in 1957. 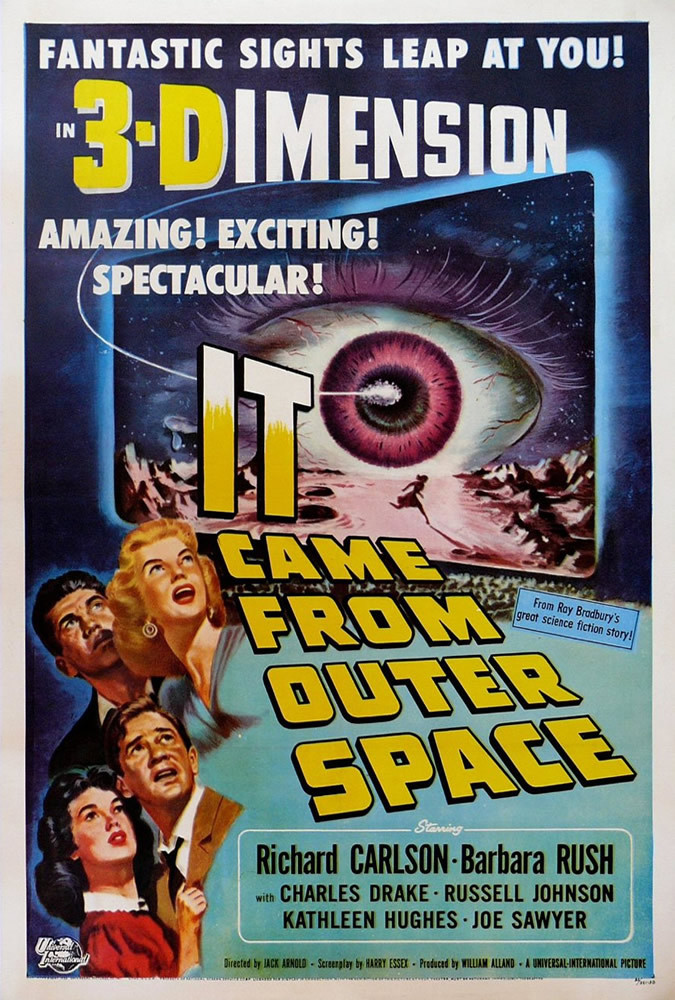