“The film lives through the superb raw angst-ridden performance of Phil Daniels.”

A frenetic film version of The Who’s rock opera that’s set in 1964 at a time when the war between the rival biker gangs, the Mods and the Rockers, was headline news for the British tabloids. Franc Roddam (“War Party”/”The Bride”) in his film debut brilliantly directs this energetic musical drama that tells a bit about those confusing times for the disillusioned young in England.

The film lives through the superb raw angst-ridden performance of Phil Daniels as Jimmy, an authority hating lower-middle-class 19-year-old living at home with his scowling parents and working a dead-end day job in the mailroom of an advertising firm. His only identity he respects is as a mod and he makes it out to be his only chance to be somebody, as he hangs with his like-minded, disenfranchised and similarly masqueraded crew—his three main men are Dave (Mark Wingett), Chalky (Philip Davis) and Spider (Gary Shail). Most of the time the parka wearing and stylishly suited gawky Jimmy is looking as if he’s ready to explode at any moment, as he heads down a path of self-destruction and is in too much of a daze to see that. The lad regularly parties, digs the music, goes to club dances with his comrades, brawls with the rockers, loves getting attention, has a maniacal grin and pops pills in huge quantities—preferring the “blues” (the pre-‘ludes tranquilizer). His big giggle is running amok on a three-day Bank Holiday on the beach at Brighton, where the biker gangs clash in a big brawl at a cafe and he scores his popular Mod dream girl Steph (Leslie Ash). The leader of the Mods is the stylishly dressed Ace Face (Sting, his film debut), who during the riot lands in the slammer with Jimmy. After that highlight reel of his life, Jimmy goes on a bummer as he unravels and the pic has nowhere to go but follow him on his path to self-destruction as the slutty and heartless Steph dumps him for another Mod, he gets fired, his scooter is destroyed in an accident and his parents kick him out. The schizophrenic (the title refers to four-way schizophrenia) hero then revisits Brighton and discovers to his further anger that the Mod leader he hero worships, Ace, is working there as a bootlicking bellboy. Unable to grasp life without tribal acceptance and with his last illusion shattered, Jimmy decides to ride the scooter he stole from Ace to the edge of the cliff and, I don’t know if he lives, he jumps off just before crashing the scooter into the sea below.

The re-creation of period detail such as the unrest, uniforms, violence, sex, drugs and music, is nearly perfect. With the film’s downbeat mood captured by songs such as “Love Reign O’er Me,” “Dr. Jimmy,” “The Real Me,” and “Bellboy.”

By the end, the viewer might be almost exhausted as was the confused youth who could never find himself and depended on others for his well-being. The intense drama is filmed close-up with a handheld camera, keeping things stark, gritty and edgy. 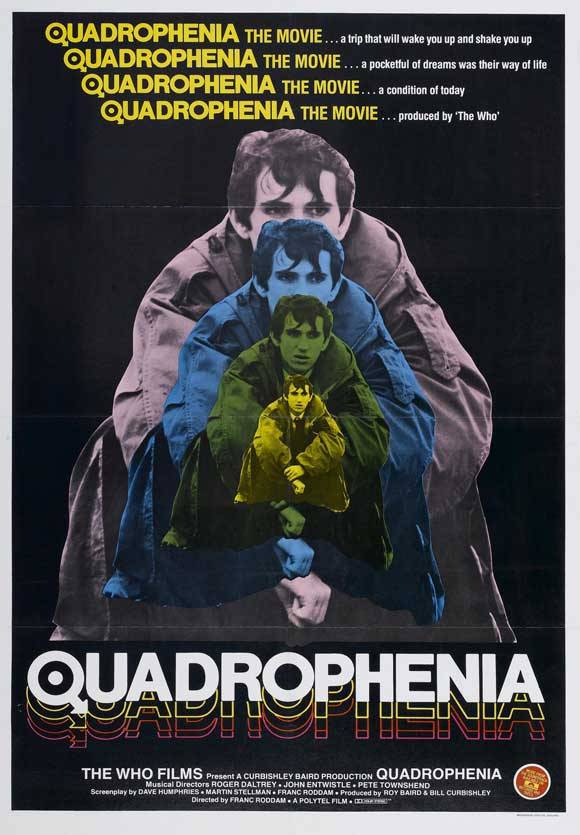