A BLUEPRINT FOR MURDER

“This is a well-acted thriller.“

A realistic mystery story about an investigation of a child suspected of being poisoned to death by strychnine. Director-writer Andrew L. Stone keeps the terse story tense despite the almost certainty that the murder suspect is indeed the obvious guilty one, but he leaves open that it is not absolutely certain who did it until the climactic last scene.

Whitney Cameron (Joseph Cotten) is the concerned uncle who rushes to the NYC hospital from his home in Boston to see how his deceased brother’s daughter Polly is doing after going into a convulsion. His brother recently died and his wife Lynne (Jean Peters) is taking care of Polly and her younger brother Doug, children from his former marriage. When Polly seems to have recovered but goes into another convulsion late at night and suddenly dies Dr. Stevenson, the one treating her, doesn’t understand how and wants an autopsy performed, but Lynne refuses.

In a hurry to get back to work Cameron is about to leave but the family lawyer Fred Sargent (Merrill) and his news reporter wife Maggie (McLeod) become suspicious of the way the child died, suspecting that she’s been poisoned. Maggie reminds Cameron that his brother died in the same way while also saying, “Don’t touch my feet.” His brother’s death was classified as caused by sleeping sickness, a virus infection, but there wasn’t an autopsy performed. At first, Cameron is reluctant to believe that the very loving, prim and pretty Lynne is capable of murder. But the motive soon becomes clear when Fred says he drew up his brother’s will and it states that his wife gets to inherit the entire estate if the two children are deceased.

Behind Lynne’s back, Cameron has the police perform an autopsy on Polly and they find enough strychnine in her to kill four horses. They then call in for questioning all the servants and Lynne, and she becomes the prime suspect. In their investigation they find that the child was poisoned in the hospital and that her last medicine didn’t come from the pharmacy but that Lynne brought it from her own pharmacy. When they try to indict her on murder charges, the judge throws out the case for lack of sufficient evidence. The pain on Cameron’s face relates to how helpless he feels because the system doesn’t work. The fear now is that young Doug will be killed next and he can’t do anything to prevent it.

Warning: spoiler to follow in the last two paragraphs.

Lynne informs Cameron that she plans to take Doug by boat to Europe for a year’s vacation to get him to forget the ordeal. Cameron is afraid that she will get away with poisoning him, and therefore comes up with an extreme plan to thwart her. He surprises her by joining the voyage and trying to romance her so that she is not suspicious of his presence. His ultimate plan is to poison her but when the time comes, he can’t. But while having a last drink in her room he discovers in her bedroom a bottle of aspirins, with a few pills having a different marking on them. He surmises that those pills will be used to poison Doug. So he takes one of them and puts it into her drink and has the ship’s detective there in case she confesses. She has 5-10 minutes to get the doctor to help before the poison sets in for the painful convulsions to begin. But she doesn’t call the doctor until after that time period passes, as she tries to decide which of her two choices is the better one: the electric chair or dying from the poison. She decides to take her chances in court, where she will later on be convicted and sentenced to life.

This is a well-acted thriller and it is directed with some nice touches, as when Cotten is romancing Lynne on the deck but is disturbed as a door opens to a burst of laughter from some party-goers–which indicates their romance is only a joke. Also, in the climactic scene, when we are certain of Lynne’s guilt, but under duress she manages to convincingly act indignant toward Cotten for playing on her hospitality and deceptively using her under false pretenses. We notice a doubt that creeps over Cotton, as she questions what kind of man he is to poison her. 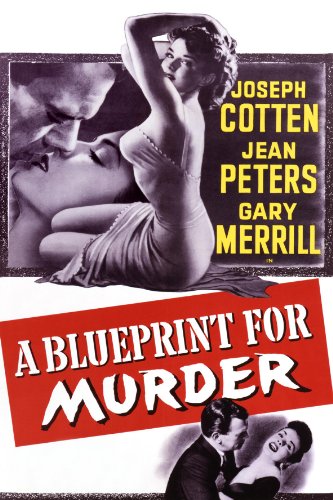