“Pushover” opens to a bank robbery by the Harry Wheeler gang. When a security guard tries to thwart the robbery, he’s gunned down as the thieves escape with $200,000. Lt. Carl Eckstrom (E. G. Marshall) is in charge of the investigation, and informs his detective team that Harry Wheeler (Richards) has been identified as the gang leader and that he has a girlfriend named Leona McLane (Kim Novak) whom he keeps in a luxury apartment and will probably contact. Detective Paul Sheridan (Fred MacMurray) is ordered to meet her and see if he can find out anything.

Sheridan meets her after a movie they both attend alone, “The Nebraskan (starring Phil Carey, who co-stars in this film),” when he purposely stalls out her car and ends up shacking up with her for three days while they wait for repairs. When he comes up with nada info, Eckstrom organizes a phone tap and an around the clock stakeout of her Los Angeles pad. The lesser detectives take the non-eventful dayshift while Paul, Paddy Dolan (Allen Mourse) and Rick McAllister (Phil Carey) take the nightshift.

The middle-aged Paul while tailing the much younger Leona to another apartment is spotted by her, but told that she still loves him even if he’s a cop. She tempts him with an offer of double-crossing Wheeler by killing him and taking the loot. Leona says he has arranged a coded message of how they will meet when he calls. At first Paul refuses but his lust for the sexy blonde who is draped in a mink coat and dabs perfume on her that costs $100 an ounce, is too much of a temptation for the lonely and embittered bachelor who remembers his parents always fighting over money and thinks this is his chance to get both the money and the gal he always wanted. Paul desires money because he believes it makes the world go round.

At the same time of Leona’s stakeout, Rick becomes enamored by the vulnerable and pretty single nurse named Ann (Dorothy Malone). She resides next door to Leona. The bachelor unethically snoops on Ann as she waltzes around the apartment and thinks nothing of invading her privacy, as he fantasizes she could be the girl he’s looking for.

When Harry calls Leona, Paul’s reckless scheme goes into action. But complications arise when the 25 year veteran cop Paddy isn’t on his lookout spot and instead comes out of a bar and spots Paul tailing Harry. Paul kills Harry even though he had strict orders to capture him alive to see who his partner was. Despite this complication, Paul still plans to rob the loot in the trunk of the car without reporting it. He tells Paddy he’s doing it to cover for him. But Paddy recognizes what Paul is up to and doesn’t fall for that lie. The other complication is that Ann goes next door to borrow ice for her party but finds Paul there and can now identify him as the killer of Harry, as he went back to Leona’s pad to deliver the all-clear signal.

Paul at first seemed like an honest, confident and clever police officer, but that perception seems superficial as he falls deeply into a web of crime and resorts to committing more than one murder. In reality he’s a bit of a jerk who can’t think straight and falls heavily for the femme fatale, thinking he needed the money to get her and that their attraction to each other wasn’t enough. If that theme of murder for money and freedom sounds familiar, it’s because MacMurray had the same type of role in the superior film noir Double Indemnity but with only a slight variation on that theme in Pushover. Here Novak is only the object of his desire not the one who manipulates him, as in “Double”. In one spot, she even tells him to forget about the money.

This jaded couple who lust after each other but are too foolish to let their love grow is contrasted with the innocent puppy love growing between the younger and more balanced Rick and the more wholesome career woman Ann, whose love for each other grows gradually and within bounds. Their love is secondary to doing their duty and is viewed as safer and more promising in the long run. “Pushover” covers familiar film noir territory, but does a good job of showing how easy it is to lose control of one’s life when one is so vulnerable, obsessed and emotionally weak. Novak does a fine job in her first starring role as a heartless femme fatale who does have a heart after all, but is too inexperienced to prevent the man she loves from disintegrating because he becomes more obsessed with money than with her. 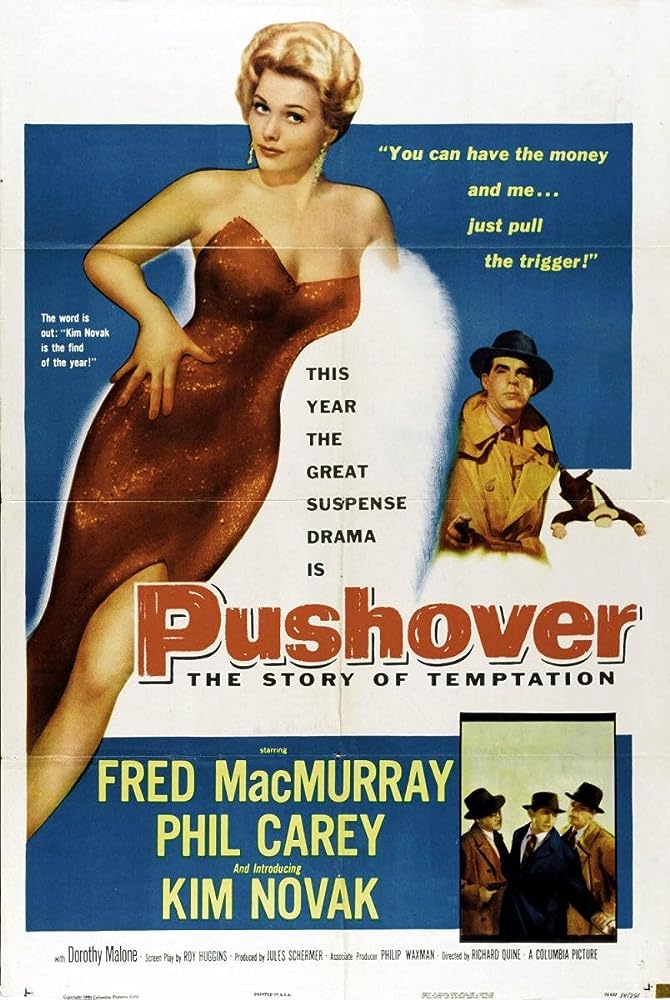