The debut feature of Aussie filmmaker Jocelyn Moorhouse (“How to Make an American Quilt”/”A Thousand Acres”) is this sharply tuned spellbinding unconventional psychological drama about a blind man dealing with emotional security, learning to have faith in the unseen and to forgive others for their flaws, and in trying to deal with his seductive housekeeper.Its fervent pitch and cynicism about the human condition reminds one of The Servant byPinter/Losey.

Martin (Hugo Weaving) is a 32-year-old blind photographer living alone with a seeing-eye dog, who trusts no one–especially his manipulative plain-looking 30-year-old housekeeper Celia (Genevieve Picot), also a photographer, who has a perverse desire to screw and control him.As a child, Martin became convinced his mom lied to him about the sights she described to him in their garden and requested a camera to get proof of what was the truth.He has since relied on the camera to be proof of what is described to him and it becomes a way of trusting in what he can’t see but can only sense–but he has to rely on others to tell him honestly what’s in the photos.

At the vet’s waiting room, where Martin is bringing his pet cat for treatment, he befriends the young restaurant kitchen worker Andy (Russell Crowe).He comes to an arrangement whereby Andy tells him about the photos taken, and he soon comes to rely on Andy telling him the truth. That’s something he doesn’t believe Celia is capable of, and doesn’t want a pity fuck.

The trio meet and a complex tale of betrayal emerges, that becomes as enthralling as a thriller. It’s a deceptive original work, with an intelligent and well-thought-out denouement that has astounding performances from the leads. In the end, the guileless Crowe character says “Everybody lies, but not all the time,” which sums up where we are going with this caustic and well-executed ethical parable. 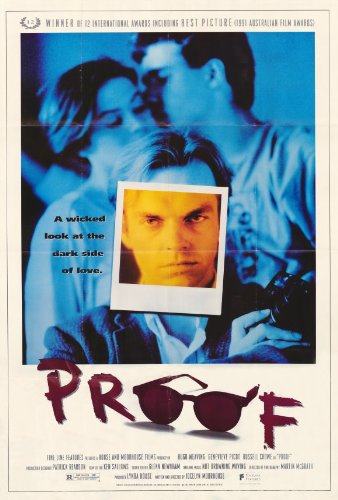