Prisoner of the Mountains is an updated version of the anti-war short story by Leo Tolstoy which took place 150 years ago (the author has been dead for about a century) and is set in the Caucasus mountains (it was filmed in Dagestan) where the Russians were fighting Chechnyan rebels in a guerrilla operation. The updated version still has the Russians fighting the same enemy, but sets the action in modern times. “Prisoner” won the International Critics Prize at Cannes. The strange thing about this grim tale is that it not only relates to an older period of war in history, but to the modern war as well. It studies both the Moslems and the Russians while taking no sides, as it tries to find the common link in their humanity to stop this chain of hatred that seemingly goes on and on. It finds its humanity through its two young innocents on both sides who are forced into being a part of the bitter war, as one is a draftee in the Russian army and the other is enslaved to a rigid Moslem traditionalism she can never leave. Both innocents in due time are gradually able to see at last the light and want to put an end to the constant need for revenge. But the war continues as others can’t stop fighting and the two would-be lovers can’t be allowed to get together even though they are attracted to each other, who in a more rational world would have a chance to find each other. The soldier hostage whittles toys for her, fixes her father’s broken watch, and yearns for a smile. The young girl quietly recognizes that he’s not a bad person, and relates to his concerns for her as she serves him food while wearing her best necklace just for him–one of her few possessions.

The film opens showing the mass physical examinations of inductees to the Russian army; the next scene is in the Caucasus mountains, where Chechnyan rebels ambush a group of Russian soldiers. The two soldiers who are taken prisoners are barely alive, but are not killed immediately as is the rebel custom. Vanya Gilin (the director’s son, Sergei Bodrov Jr.) is an inexperienced recruit seen earlier during the physical as one who is ready and willing to serve in the army. The other is a cocky, dapper, volatile, hardened veteran, the careerist sergeant, Sacha (Oleg Menshikov-he appeared in “Burnt by the Sun“), who joined because he was “stupid, loved guns, and needed money.”

The stone-faced patriarch of the unnamed mountain village, Abdul-Mourant (Jemal Sikharulidze), wants to trade the Russians for his teacher son, who is a captive of the Russian army. The Russians are kept alive only for that reason, as the other villagers want them killed. They are fed while shackled together in leg irons and watched over by Abdul’s mute son-in-law Hasan (Aleksandr Bureyev). He had his tongue cut off in a Russian prison in Siberia, as he served time for executing his cheating wife and her lover.

Unfortunately, the deal goes sour when the swinish Russian commander (Aleksei Zharkov) mistrusts the Chechnyans and thereby scuttles the deal. Not willing to give up his son’s release without taking further action, Abdul forces Vanya and Sacha to write to their families so that their mothers will come to the area and arrange with the Russian army for a deal. It turns out Sacha has no one to write to since he’s an orphan who found a home in the army where his kind of violent skills were useful. Vanya’s widowed mother is a school teacher who comes to save him and tries her best to make the deal work, as she’s only concerned with saving her son as the war is secondary. The parents are shown as the ones who could put an end to war by not allowing their sons to go to war. Meanwhile, the captor’s 12-year-old daughter, Dina (Susanna Mekhralieva), is won over by the kindness of Vanya and has a change of heart about letting him be killed by her father when the second part of the brokered deal gets bungled after her other brother goes into the prison and tries to free his brother and loses his life–thereby Abdul loses his two sons.

“Prisoner” is enriched by its scenic and moody photography and in showing how the villagers exist by the strength of their religion, family ties, customs and traditions that go back generations. In its simple aim to show how war is mankind’s curse, the film is effective. As drama, its strength lies in the ability for the characters to resonate as individuals and in how well-told is the story. The film offers no surprises and doesn’t say anything that’s startling, but it’s still powerful in the anti-war feelings it conveys and its earnest message seems timeless. 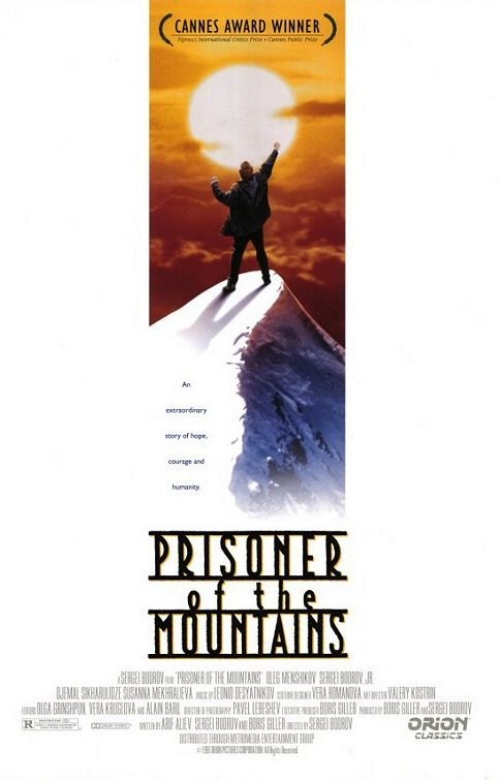