PRISONER OF SECOND AVENUE, THE

Melvin Frank (“Knock on Wood”/”The Court Jester”/”A Touch of Class”) smoothly directs this urban comedy based on the 1971 Tony award-winning play by Neil Simon (it starred Peter Falk and Lee Grant), who also is the screenwriter. It’s darker than the usual Simon play (more dramatic moments than comic), with everything seemingly forced (especially the flat jokes), routine and predictable. At its best, it’s a second rate Death of a Salesman. Gene Saks has a supporting role as Jack Lemmon’s boastful wealthy older brother. Oddly enough, Saks directed Lemmon in The Odd Couple.

Simon’s inspiration for the play came from an incident that happened to his wife’s uncle, who tired of being a successful businessman and followed his dream at age 50 to run a small town newspaper. The business failed and the uncle was broke and on the verge of a nervous breakdown, which Simon thought could be mined for pathos and humor.

Uptight Mel (Jack Lemmon) and his understanding practical-minded wife Edna Edison (Anne Bancroft) are a longtime married Manhattan middle-aged couple living in a luxury hi-rise apartment on the Upper East Side, which causes them grief as things break down, from their terrace they can smell the garbage and their noisy neighbors keep Mel awake at night. Also the city is undergoing a severe heat wave, which keeps everyone a little edgy. Things get dicey when the already neurotic Mel gets even more tense when he loses his executive job due to downsizing and his apartment gets robbed, as he goes in a downward spiral where he’s in danger of completely losing his marbles.

Lemmon and Bancroft do a good job conveying comedy and in warm performances showing how tough life can get for a middle-class couple dealing with the hassles of city life and their own personal problems. All the problems are believable ones that ordinary New Yorkers probably also face on a daily basis.

The supporting cast has fine performances from Elizabeth Wilson and Florence Stanley as Lemmon’s concerned sisters; M. Emmet Walsh is the doorman, F. Murray Abraham has a brief bit as an angry cabbie, and Sylvester Stallone has a funny bit as pickpocket in Central Park as he encounters Lemmon. 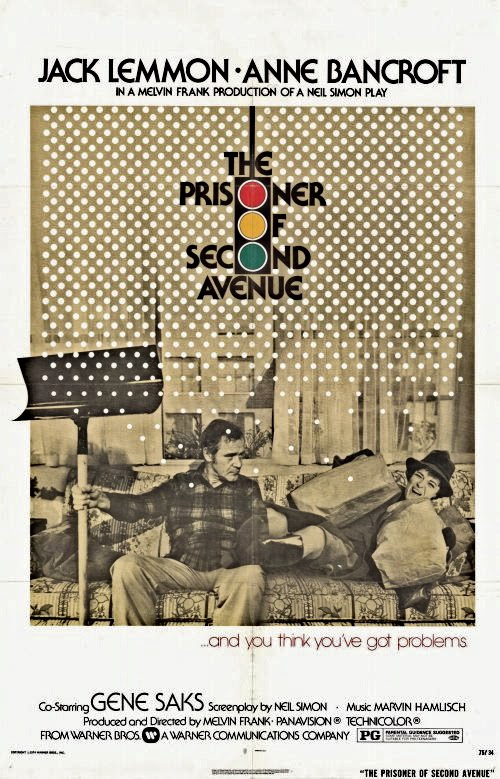