“A goofy B action thriller with Bela Lugosi.”

Postal Inspector is a goofy B action thriller with Bela Lugosi as the shady owner of a prominent nightclub. Cute nightclub singer Patricia Ellis is on a plane with Postal Inspector Ricardo Cortez coming into the small-town of Millstown. Due to foggy conditions the passengers are nervous, so Ricardo comes up with the bright idea that Ellis sing to the passengers to calm their fears. Waiting at the airport is nightclub owner Bela to greet Ellis and use the bumpy plane ride incident to get favorable publicity for his nightclub. Michael Loring is waiting for his older brother Ricardo, but recognizes Ellis as the sweet hometown girl who went to the big city to get fame. He immediately makes a date with her and by the end of the film they will marry.

Ricardo is all post office rah-rah, as he exults in the good work his men are doing to catch postal crooks. He’s a no-nonsense guy. FDR is heard in a radio address congratulating the postal inspectors for delivering the gold for the Federal Reserve System to inland cities across the country without a hitch, and that gets Ricardo to beam with pride.

Catching Ellis sing at the nightclub, the brothers chat about how important their job is. Loring, who also works for the post office, tells Ellis about a three million dollar transfer of money the post office is making tomorrow. Not realizing that this is supposed to be a secret, Ellis jokingly tells this to Bela. What she doesn’t know, is that Bela owes $50,000 to a mobster who threatens to kill him if he doesn’t fork over the dough.

When a flood hits their town and all activity is hampered, Bela steals Loring’s car–the one he lent to Ellis–and pulls off the postal heist and kills a worker. Because of the auto, the postal inspectors suspect Loring and Ellis of the crime. But the couple tracks down Bela in his secret hiding place to clear themselves, and the film ends in an exciting motorboard chase through the flooded city.

This is an obscure Bela Lugosi film. Bela’s fans will love him in this restored film that is now in good condition. Patricia Ellis sings the happy tune “Bluebirds on wallpaper decorating our dreams.” 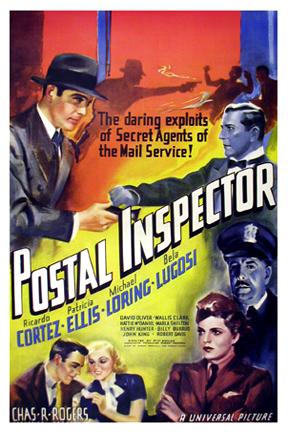