Toronto director Ron Mann (“Grass”/”Twist”) puts together an exciting poetry reading documentary of 24 diverse hipster North American poets reciting one or two of their shorter poems. The featured poets include Allen Ginsberg, Robert Creeley, Gary Snyder, Ted Berrigan, and Charles Bukowski. The film sparkles as the animated poets do their thing–some make comments and others only read their poems. It’s the kind of authentic real thing experience for the viewer that separates the poetry pretenders from the real enthusiasts of the 80’s poetry scene. If nothing else, invaluable as an historical record. But the documentary is much more than that, as it wisely lets the ‘performance poets’ perform and never gets bogged down in bullshit or the pretense of listening to talking heads explain things away.

The dour Bukowski comments “Most poets can’t write a simple line.” Creeley reads from his poem Bresson’s Movies. John Cage mentions “Silence doesn’t exist.” Gary Snyder speaks for the “clarity of the mind with no opinion.” Arguably the voice of our generation, Allen Ginsberg, comments that a “poet makes up his own scenario. It’s accurate because it’s based on the truth.”

It’s the kind of rare documentary, where the subjects are thankfully allowed to speak for themselves. In this case, the poets are all articulate and do themselves proud. It’s a film not only for English lit majors, who should jump for joy to see such stars of the poetry world, but also those who profess any sort of interest for poetry. 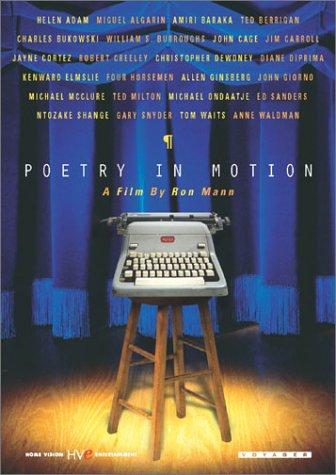