Ron Howard trashes the true story of the mentally troubled Nobel Prize-winning mathematician genius John Forbes Nash Jr. (Russell Crowe) by falsely twisting his story around. He creates an elegant and glossy middlebrow melodrama that has a false ring. This takes away from the real struggle Nash experienced going from his heights of notoriety to his depths of depravity and then redeeming himself as a Nobel Prize- winning teacher again at Princeton.

In real-life the legendary 73-year-old Nash still teaches at Princeton, and walks to work every day (One of the few things the film got right). It’s a shame that the director and screenwriter Akiva Goldsman insult the intelligence of the viewer by distorting NY Times’ economic reporter Sylvia Nasar’s best-selling biography. If he wanted to create a fictional account of Nash’s life, he should have said that was his aim. But to present this film as the real-life of Nash when it isn’t, is just plain dishonest. Instead of going for the true story it skims over events and fails to get at what Nash is about, as it lands solidly on a surface explanation of him that is cleaned up further for its PG-13 rating and mass appeal. That it elicits genuine tears and sympathy for Nash, is only because the film story also calls for him to be applauded for overcoming his trials with his mental illness.

“A Beautiful Mind” sets its paranoiac cold war mood for intellectuals in the elite colleges of the 1950s as it opens with a speech by Nash’s supposed mentor, the fictitious Professor Helinger (Judd Hirsch), stating that American mathematicians won the war over the Nazis because of the intelligence they provided and must now turn their attention to defeating the Soviet Communists.

Nash in 1947 is the brash West Virginia-bred genius who enters Princeton University as a scholarship graduate student and through Crowe’s showboat performance pulls off his arrogant know-it-all loner act. He acts self-important, socially awkward and nerdy around his peers, and manages while not attending classes to discover a breakthrough in economic theory (it is uniquely presented as a way for picking up coeds at a student bar). His only friend in the film was his flask drinking literary-minded roommate Charles (Bettany), while his main antagonist was the socially acceptable bright student leader of his group, Hansen (Lucas).

This breakthrough gives Nash an international rep and a top-level job with a Pentagon-connected outfit called Wheeler Labs. Nash takes with him from Princeton two fellow grad students, Sol (Goldberg) and Bender (Rapp), as his assistants. Nash shows his natural ability as a codebreaker, helping the Pentagon break Soviet code about their Hydrogen bomb placements. This brings him to the attention of shadowy government security agent William Parcher (Ed Harris), who hooks him up for further classified projects. Nash gets top-secret clearance and through this assignment gets a richly endowed teaching fellowship at M. I. T.. It’s here that he meets and courts a bright mathematics student, Alicia Larde (Jennifer Connelly). They get married and have a son named John while he continues to be a spy for the government, sending secret info to government agents via undisclosed drop-off points and code-breaking secret messages he believed the Soviets were sending him through the pages of the New York Times and other popular magazines. The stress of his code-breaking gets to him, and he has a mental breakdown. Nash is treated by a mysterious psychiatrist Dr. Rosen (Plummer), as he’s plagued by imaginary images of federal agent Parcher chasing him. Rosen releases him from the mental hospital with prescribed medication for his schizophrenia. Nash will continue to have delusions for the remainder of his life, and when first released from the hospital he’s without work and deeply depressed. But in due time Nash gains the strength to go back to Princeton and with the support of Hansen, now the department head, he regains a teaching berth and finds success again.

The film gets around its bogus story by presenting Mr. Nash as a socially awkward genius, possessing one of the most gifted mathematical minds of his generation who by his early 30’s, when mental illness overwhelmed him, had already accomplished a solid reputation in various fields, including game theory, quantum mechanics and number theory. After many decades of struggle with schizophrenia, he miraculously recovered. In 1994 he was awarded the Nobel Memorial Prize in economic science for work he had done as a doctoral student at Princeton in 1947.

What was never shown onscreen, was how Mr. Nash was notorious among his colleagues for his antisocial behavior coming in the form of cruel retorts and dangerous practical jokes. The film paints a false picture of Nash as a cold war warrior and anti-communist crusader, when that is contrary to the facts. In 1960 Nash tried to renounce his United States citizenship to express his belief in the necessity of a world government. Nash was always more interested in the research being done to benefit mankind than having his work used for military purposes.

What also isn’t mentioned in the film, as reported in the NY Times review by A. O. Scott, is that Nash married someone before Alicia, with whom he also had a son named John. That woman was named Eleanor Stiers, and Nash cruelly abandoned both mother and child to poverty. Nash formed a number of homosexual relationships, and he lost his security clearance and his position at the RAND Corporation after he was arrested for soliciting sex in a men’s room in Santa Monica, Calif.. When his illness became intractable and his behavior intolerable, Alicia divorced him (they remarried last June).

The film misrepresents who the real Nash is, in its revisionist look sees him as a lovable timid man who means well but doesn’t know how to relate to people. The filmmaker has given us this false bio to elicit all the sympathy it could get from him in the hopes of creating a blockbuster. Everything rings false including all the sledgehammer effects by the director to make his story sweeter than it is, plus Crowe’s hammy and contrived acting performance which unfortunately reminds me of Dustin Hoffman in Rain Man and Robin Williams in most anything he does. It was not a credible performance since he was never able to get inside his character and therefore had to resort to giving him odd quirks to show who he was, which was his way of showing how he thinks a mentally disturbed genius would act. The shame of it, is that it spoils an interesting bio on someone who overcame a mental illness and deserves that his story be told truthfully.

Ms. Connelly gives an earnest performance as a Nash student admirer and later on as his long-suffering wife/nursemaid, but it is an underwritten role and goes nowhere. Mr Harris’ role was also underwritten, as it didn’t add up and is just played as part of the delusions Nash is having.

“A Beautiful Mind” if judged on its own terms, is a fairly compelling and well-made tearjerker. But if held up to a higher standard, its idea of what is beautiful becomes delusional and intellectually deficient. A film that plays like a mind tease. 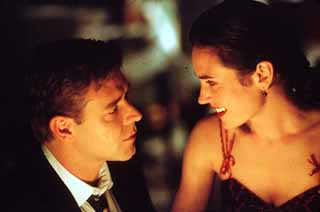 DEATH ON THE NILE