“One of the greatest children’s film ever made.“

One of the greatest children’s film ever made. It’s based on the hit play by J.M. Barrie, and is written by Willis Goldbeck. The Broadway play that ran from 1904-1913 featured Maude Adams as Peter, who made the role she played on and off for all those years a coveted one.Women were chosen for the Peter role because it required flying across the stage on a harness and petite women were easier to carry than men. Barrie sold the rights of his precious play to Paramount provided he alone could chose who plays Peter Pan, and surprised everyone by turning down such established stars as Mary Pickford, Gloria Swanson and Lillian Gish for the virtually unknown ballet dancer teenager from New JerseyBetty Bronson. The great Paramount film vanished from the studio after its release and was not seen for decades. It was finally located at the Eastman Theater, in Rochester, which was owned by Kodak, in a vault of decomposing nitrate films. The highly flammable film was restored in 1952 with its authentic color tints intact and in 1999 it added a music score by Philip C. Carli. The special effects are few but are remarkably well-done by Roy Pomeroy. Director Herbert Brenon (“The Telephone Girl”/”Lummox”/”Wine, Women and Song“) does a nice job keeping it jolly and kid friendly, completely capturing the intention of the author to keep it as a children’s delightful lark.

The playful Peter Pan (Betty Bronson) flies into the second floor nursery room of the cute Darling children–Wendy (Mary Brian, 16 at the time), John (Jack Murphy), and Michael (Philippe de Lacey) — looking for his shadow snipped off by their household dog and after getting his shadow stitched on by the oldest child Wendy, teaches the kids to fly. The children’s nurse is the dog Nana (George Ali), as the human nurses refuse to work for their kid’s irritable and twitchy father (Cyril Chadwick). When the parents dine out, the protective Nana is placed outside in the doghouse by Mr. Darling and can’t prevent the kids from flying off with Peter, the eternal youth who never grew up, as they go into the dream forest of Never Never Land, an island where Peter takes care of the Little Lost Boys. The sweet Mrs. Darling (Esther Ralston, 23 at the time) is heartbroken at the loss.

The adventures in Never Never Land include one with Tinker Bell (Virginia Brown Faire), a fairy sidekick of Peter’s who is not seen clearly in close-ups on orders from Barrie but is clearly seen as a flash of light, who becomes jealous of Wendy and Peter’s growing friendship and persuades one of the Lost Boys to shoot her with an arrow. Wendy recovers from the wound and forgives the shooter, and then treats the boys as if she were their mom. The group, living with a friendly Indian tribe, also visit a mermaid colony. After pirates attack the Indians and kidnap the Lost Boys, Peter Pan frees them and there’s a sword fight between the Lost Boys and the gruff Captain Hook (Ernest Torrence) and his notorious band of pirates. With that success and Hook forced to walk the plank, the children return home and bring along the orphaned six Lost Boys for their mom to adopt. Peter is also offered a chance to be adopted, but opts to return to the magical Never Never Land and just have fun.

The film comes with the warning that if one of the actors says I don’t believe in fairies, one fairy dies. 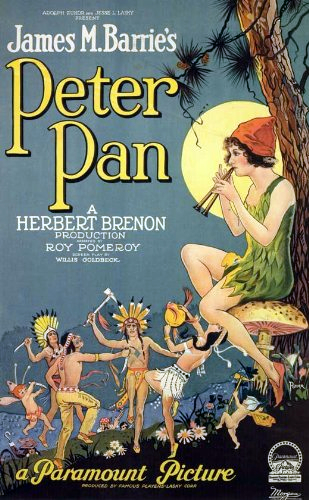