Strange, confusing, and psychedelic, all are apt descriptions for this easy to follow story but most difficult film to keep track of. That is mainly due to the elliptical editing, fast cuts, forward and backward flashbacks, and a montage of images with all kinds of implications behind them. It is a film that of all studios, for Warner Brothers to come out with it just doesn’t make sense. This is not the type of independent artistic film they make over there. Their reaction to seeing the finished product was predictably one of disbelief and disgust. They felt they had been dirtied by having their name associated with this film, and they blamed it on Donald Cammell. He is the former artist now film director who refused the studio’s demands to cut huge portions of the film, therefore the film was put on hold for a few years until Cammell was called back to finish the film his way. Nicolas Roeg, at that point, disassociated himself from the film but since his name was left on it and Cammell was an inexperienced 26-year-old director, Roeg unfairly received the lion’s share of the critical credit. That credit came from the established critics who, true to form, didn’t recognize what an innovative and masterful film it was until much later. An underground audience, well-aware of the peyote mushrooms and psychedelic flashes throughout the film, rushed to see it in a party-like ‘hippie’ atmosphere during the midnight hours it was shown, to packed audiences. Warner Brothers was clueless how to market the film, whether as a Mick Jagger ‘rock’ experience or as a gangster film. Therefore the film floundered in the box offices across straight America, and was quickly pulled out of the theaters by the unhappy studio executives.

Chas (James Fox) is the muscleman for a London protection racket run by a poof, the egotistical and perverted Harry Flowers (Johnny Shannon). That Chas is an anal compulsive, an artist in his field of enforcement (a takeoff on the British gangster Jimmy Evans), thoroughly enjoying his work of putting the fright into those who cross the organization is shown as he leaves the woman (Wickens) he just slept with and goes to work smartly dressed in a suit and tie. His job this morning is to warn the accused who is on trial for being a party to an unethical merger, that he’ll be in a wheelchair if he implicates Harry Flowers in any way. When his lawyer butts in, saying he is not intimidated, Chas returns with the boys, Rosy (Meadows) and Dennis (Morton), and they gag the lawyer’s chauffeur and razor cut his hair, and take a bucket of acid to the lawyer’s Rolls Royce, ruining the paint job. The next one they go after is one of the East Enders Chas grew up with and whom he now hates for various personal reasons, Joey Maddocks (Valentine), who is being forced into joining the organization and giving up control of his horse betting parlor. Harry warns Chas to stay out of this, keep your personal things out of the business. When the boys decorate Joey’s place Chas walks in when it’s over and rubs it into Joey, taking him to see Harry. Joey joins the organization, gleeful at seeing Harry admonish Chas for not listening to him and calling him mockingly, the Lone Ranger.

Joey will jump Chas in his flat after they leave Harry’s, wrecking the place and pouring red paint all over it, and with the help of two of his boys pin down Chas and whip the daylights out of him. Somehow Chas gets free and fatally shoots Joey, which turns out to be his downfall. He now has to go on the run from the gang and from the police.

One of the highlights of the first half of the film, was the nude dance number performed by the Harry Flowers gang. They danced, sang an ode to Harry, and we saw that these poofs can be just as notorious as America’s gangsters. Their overt homosexuality as demonstrated, indicated that homosexuals wield tremendous power within the British crime organizations.

The next half of the film is about Chas finding shelter in the Notting Hill home of a once famous pop singer, Turner (Mick Jagger). He is now reclusive, living with two foreign birds in an exotic sexual relationship. They are the well-built Pherber (Anita) and the skinny, masculine looking Lucy (Breton). What abounds in Jagger’s bohemian place are head trips, mind-screwings, and the merging of personalities and sexual characteristics. Each artist is currently stuck and in a dilemma on how to resolve their problem: Fox enjoyed his work too much and didn’t know when to stop, and is now doomed. Jagger has lost his demon for madness, which gives him his creativity to perform. It seems as if, in a strange way, these two opposite personalities have similar impulses that give them their power to succeed. This is Jagger’s thought as he attempts the merging of their personalities through alchemy by feeding Fox those potent mushrooms and getting him confused about his masculinity and who he really is. When Jagger can digest his trip fully he trades places with him, even though he knows Fox is in extreme danger of losing his life.

Fox needs to get a passport from Tony (Colley), someone he assumes he can rely on, as he phones him for help to escape to America (a very good place for gangsters and performers to go to). Unfortunately for Fox he is double-crossed by Tony, who tips Harry off to where he is.

As a reward for getting into Fox’s head, Jagger is shot by him when Harry’s boys come to take Chas away on a ride he will never return from. I guess it is one head trip exchanged for another, each doing it the way he knows best.

The violent trip that Fox is on has been around forever, as under the hallucinogenic drug time becomes irrelevant and we are treated to all sorts of images from his past and present life, plus a glaring look at some of Francis Bacon’s homo-erotic art work, which makes reality and fantasy become hard to distinguish. Chas is very uncomfortable with losing complete control of the situation; yet, he sticks to who he thinks he is by pretending to be normal even though he has been sexually crossed-dressed by Pherber, thereby losing his sense of manliness. Chas and Turner both look and act differently from what society would take for normal. The last image we have of Turner is as Pherber dressed him, as he enters Harry’s white Cadillac and his face looks just like Jagger’s; but Harry has no trouble recognizing him as Chas, happily as he becomes reacquainted with his old friend.

Performance is also noted for its memorable music as arranged by the rock genius, Jack Nietzche. Some of the music played was by the Last Poets (a bitter rap song about the ‘The Big Apple),’ Randy Newman (Long Dead Train ), Buffy Saint Marie (Dyed, Dead, Red), and Ry Cooder (Bottleneck guitar).

Warner Brothers tried suing the director Cammell after seeing how he completed the film, hoping not to release it, that’s how bad the feelings were for a film that lived on to become a classic cult favorite even though it never got its proper due with the straight critics and the public. Cammell committed suicide in 1996, copying the style used by Fox when he executed Jagger. He supposedly remained conscious for 45 minutes after the shooting but was in no pain, as reported by friends. For him, murder turned out to be truly a work of art.

It was a film whose psychedelic flashes might seem a bit dated now, but all the best directors from Kubrick to Scorsese borrowed freely from it as it changed the way many mainstream films were to be made after 1970. The freshness and energy and montages of the film are unique. Its story was able to mix the world of art with violence, something that seems to be a natural fit as shown in these kaleidoscope images. What results is the merging from the opposite worlds of the underworld and underground, as influenced by the business of making money, which is their common ground: the Holy Grail at the end of the journey. It is a film that both gangsters and artists can sink their teeth into, even if the gangster might fail to recognize how he looks to others or to himself.

A one of a kind film, deserving of much critical praise. It’s a most efficacious look at the subculture of the gangster and artist worlds and, simultaneously, a most enigmatic film to try and take in all its fanciful images and perversions and drug induced fantasies. Though time has taken away some of its freshness, it still is a work of considerable power. 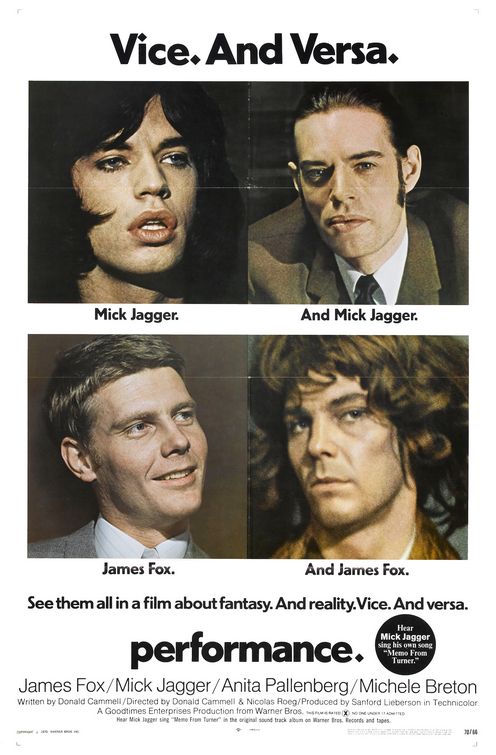