John Waters’ (“Hairspray”) latest comedy is a tasteless satire of Manhattan’s art scene, that is not only unfunny and unfocused but lacks an edge. Waters wrote and directed this $6.5 million budget film as a rags-to-riches comedy about Pecker (Furlong), an 18-year-old Baltimore hamburger flipper at a fast food restaurant who is a sweet-natured naïf with a hobby as a photographer. He becomes an overnight celebrity when photographs he’s taken of his weird family, spaced-out friends and flaky customers becomes a hit in the art world. Pecker loves taking pictures and he walks the streets of Baltimore with his second-hand camera finding art everywhere, being an alter ego for Waters who also thinks any film he makes no matter how trashy is art. When his photographs are discovered in a greasy spoon exhibition he goes to New York and hangs out with his discoverer, art dealer Lili Taylor, who snapped up his photos as ‘the art flavor of the month’ for her own nefarious purposes, while he does the Big Apple for Waters’s satiric purposes.

His name implies a funny reference to the private part, but the name originates because as a child he pecked at his food like a bird.

The film takes up favor with the Baltimore blue-collar types whose down home lowbrow taste is applauded as compared to the highbrow phony artsy types in Manhattan, who love misery in their art and fall for any trend that catches their fancy at the moment. Pecker’s friends and family are all wonderfully eccentric–so much so that they appear as one-dimensional cardboard characters. His mother (Mary Kay Place) owns a thrift shop and advises the homeless that to dress in style is acceptable; his dad (Mark Joy) runs a bar that is losing money because of a competing dyke bar across the street; Tina (Martha Plimpton), his older sister, runs a rough trade gay bar and calls everyone Mary; Little Chrissy (Lauren Halsey) is addicted to sugar; grandmother (Jean Schertler) talks to her statue of the Virgin Mary; his best friend (Brendan Sexton III) is a kleptomaniac; and his dominating laundromat girlfriend (Christina Ricci), just takes her job a little too seriously.

Pecker turns the tables on the rapacious chic New York art crowd, and shows us that it’s the crass everyday scenes in Baltimore that tugs at his heart. He appeals to those in the audience who root for the underdog and would frown on celebrity. Lacking wit and juice in his satire, Waters contrasts the tacky NYC art scene with the raunchy kitsch of his beloved Baltimore and shoots for fluff by throwing out mild barbs that couldn’t hurt a fly never mind a tough-minded NYC art patron. He presents an attitude of please like me in all my puerile perversity, I mean you no harm. One can like him, but this picture is another story. 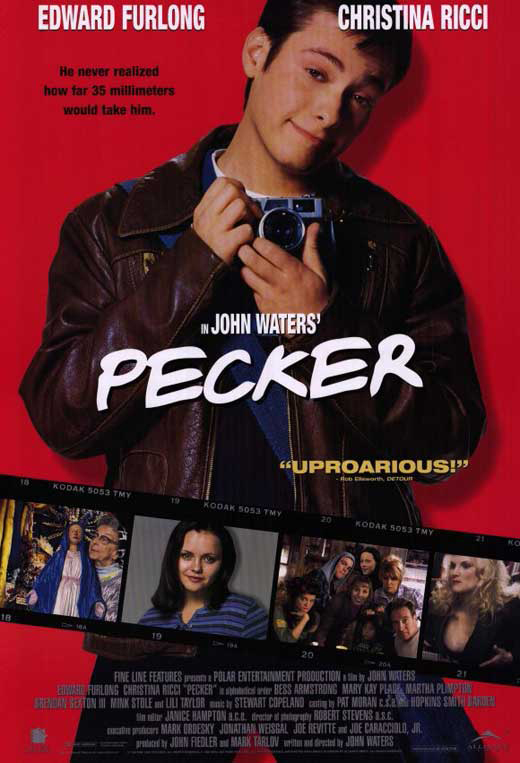