A dull and op-pressingly long three-hour ode to the glory of war and killing. It’s about the Japanese attack on Pearl Harbor produced by the schlockmeister himself, Jerry Bruckheimer, and directed by-the-numbers by Michael Bay (“The Rock“/”Armageddon“). This strictly commercial film’s budget was for $135 million and uses as its model for financial success “Titanic” and its anti-historical way of telling its historical story. It’s a film made for the huge crowds it hopes to pull in, by giving them all the goo they could possibly ingest in one sitting. It ran a cliché romance story for two hours worth of the film and after 80 minutes of this corny love story, the Japanese at last attack Pearl Harbor and the film to its credit accurately gets the chaos of the events right (the only thing it got right in the film). This invasion was the heart of the film and lasted for about 40 minutes; it got its money’s worth in good airplane battle footage from the computer-generated imagery (though the scene itself had a flatness that made it appear uninvolving even if it was competently done). For the last third of the film you could have skipped out and missed nothing, because it went back to that annoying love story it was hammering out.

This was a second rate war flick; especially, when compared to modern war films such as “Saving Private Ryan.” The trite dialogue, inept script, misuse of history, irritating character portrayals, the soapy background music, and the clanky acting by everyone concerned, made this overlong work into a critical bomb. The main characters were either boring gung-ho militarists with serious personal disorders or all-American beauties posing as super-dedicated nurses, whose only other interest besides being patriotic was hunting a man down. Every character was a stock character seen in other Hollywood films. The funniest moment in the film, which was a purely Hollywood fictional moment and meant to be deadly serious, had a heavily puffed up latex faced FDR (Jon Voight) climb out of his wheelchair to rally his White House advisers after the attack. I couldn’t help myself from laughing, it was such a silly attempt at patriotism. After the attack and FDR’s stirring “A Date Which Will Live in Infamy” speech to the nation, the country was prepared for war and phony scenes such as the FDR one was misleading as well as revolting.

The film opens in 1923 and shows farmboys Rafe (Affleck) and Danny (Hartnett) as best friends in Tennessee, only interested in airplanes. That’s about as deep as we get into their characters. They join the United States Army Air Corps in 1941 and both show an ability at being hotshot pilots while training under the command of Jimmy Doolittle (Baldwin), in Long Island. Rafe passes the eye test, despite his apparent dyslexia, on the mercy of pretty nurse Evelyn Johnson (British actress, Kate Beckinsale), accepting his pompous speech to her how he’s the best pilot in the world. Kate has fine features and virtuous good looks, and an empty expression that is the same both for love of Rafe and of country. He gets to meet her after he takes an extra immunization shot in the butt and he falls on his nose. They fall in love during their brief few weeks of courtship, but he volunteers to join a British Eagle Squadron to help them stop Hitler’s Luftwaffe invasion of their country. News comes back that he was killed in action when his plane was shot down in the ocean. The shy Danny then falls in love with Evelyn, and he soon makes love with her under one of many white parachutes left on the ground. The romantic triangle becomes gooey when Rafe comes back alive and he tells how he was rescued at sea and remained in Nazi-occupied France. Trouble between the best buddies results when Danny tries to explain to Rafe in an Hawaiian nightspot what happened and the two get into a brawl requiring MP’s to break it up. Rafe acts irrationally, believing his buddy stabbed him in the back and is angry at both Evelyn and Danny. But all three of them are at Pearl Harbor on, Dec. 7, 1941, the day the Japanese under Admiral Yamamoto (Mako) attack, and the two heroically work together to fight back from the sneak attack by engaging in dog fights with the enemy. Evelyn is splendid in the bloody hospital, never even getting one hair out of place as she rushes around treating the maimed. The most memorable scene from the attack, is the hundred or so sailors from the U.S.S. Arizona entombed below and are down too far to be rescued as they died scratching out for help.

The attack starts off by showing the 350 Japanese bombers coming in formation through the early morning sunshine as housewives hang their clothes on the lines and children play baseball. The bombers then go on to attack the American ships grouped-together, planes on the ground, and personnel in almost the same time frame the real attack occurred. The film plays it safe and lays no blame on why Pearl Harbor was so unprotected. Admiral Kimmel (Feore) can only say the War Department’s warning of an attack came an hour too late. Cuba Gooding Jr. plays Dorie Miller, a real-life cook aboard the U.S.S. Arizona, whose heroics during the attack made him the first African-American to receive the Navy Cross. His story in the film is reduced to using him as a demographic. Miller’s story is shot in a number of brief scenes: he wins a boxing match against a burly white guy, tells Evelyn he wants respect and wants to fire the weapons instead of being a cook in the segregated military, is complimented by his commanding officer for his boxing skills and later comforts him when he’s dying, and shoots down a plane. No character in the film had any shading or depth, everyone was a forgettable personality. The Kate Beckinsale character was particularly empty, we never find out her history or anything about her. We only know her father was a pilot.

The last third of the film has the two men assigned to Colonel Doolittle’s secret mission, where they bomb Tokyo (actually Gary, Indiana steel mills) to show them that we’re ready to take them on and show them what we’re all about. Evelyn waits back at a military base for them to return, but there’s no excitement about anything in this film, including whom she chooses as her man. The one-dimensional characters just say their lines and the film keeps moving along. Though this film failed in every which way to provide a history lesson, or an engaging story, or be an entertaining film; still I’m afraid it will have box-office success. It reduced everything to the lowest common denominator. The crass Bruckheimer enforces his rules for commercial success (keep the dialogue banal and keep everything in motion so no ideas could get in the way of the mindless violence on the screen). This way it remains on a fourth grade reading level and can be easily understood by the masses. It would be difficult to make a film more shallow than this one; but, I’m cynically looking forward to Bay and Bruckheimer teaming up again, I think they have the potential to stoop lower than they have so far (because as bad as this film was, it could have been worse). 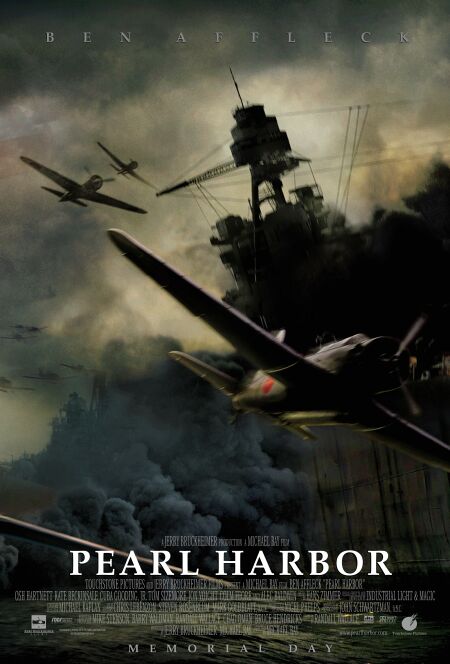