“It’s all distressing, superficial and caveman-like in its amour fou.”

This sickie sexual fantasy flick by Korean bad-boy provocateur Kim Ki-Duk (“Spring, Summer, Fall, Winter … and Spring”/”3-Iron”/”The Isle”) is a misfire except for his usual lyrical filming techniques (former factory worker Kim was trained as an artist). It’s about a speech-impaired, low-class pimp Han-gi (Cho Je-Hyun) who after being attracted to middle-class college coed Sun-hwa (Seo Won) sitting on a park bench, violently kisses her in front of her boyfriend and then is beaten in public by a few soldiers and forced to apologize. After being spit on by Sun-hwa, the humiliated thug follows her and sets her up in a bookstore pickpocket scheme, where she’s coerced into becoming a prostitute in a notorious Seoul red light district. Forget about anything being real in this film (but it’s so absurd it strains one’s suspension of disbelief).

Since the thug can only express his obsessive love for Sun-hwa by watching the demure girl’s humiliation through a two-way mirror and endearing himself to her by rescuing her from abusive clients during her training period, it should come as no surprise that she will fall in love with her captor via a Stockholm Syndrome (speaking of male fantasies!) and teach the bad boy a few lessons about twisted love by the film’s ludicrous conclusion of bliss found between the working-class thug and the spoiled privileged-class college girl.

This thinly sliced symbolically laced Freudian tale about fate, class warfare, knowing one’s self and finding love in the most extreme circumstances, is an example of the filmmaker’s allegiance to the “cinema of cruelty” school. It’s all distressing, superficial and caveman-like in its amour fou. The viewer is asked to be a voyeur and is then told he must be as sick as the sexual predator to watch this stuff. I agree. It’s an artistically pretentious film (with inexplicable surreal scenes on the beach) no matter how talented and original is the filmmaker (which is a given). This time Kim Ki-Duk’s usual mix of violent and lyrical images fails to generate the proper energy he desired to show how relationships work out of biting tensions. 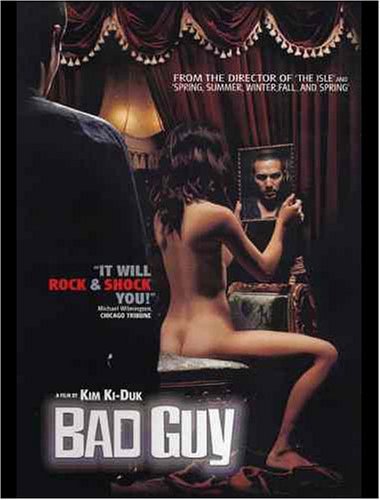 A BUCKET OF BLOOD