“The unconventional, personal and arty film is not for everyone.”

The strange plot-less post-Soviet film by Ukrainian indie filmmaker Kira Muratova(“The Tuner”/”Chekhov’s Motives“/”Second Class Citizens“), once known as the cinema bad girl in the USSR, now allowed to do her madcap irritating surrealist thing of making films by breaking the rules of logic without interference, is a film that I’m willing to wager will turn off more Americans than turn on. It won a Nika in Russia for Best Film. The photography is delicious, the many references to literature are tantalizing and the pic bizarrely raises oddball questions about the love for horses in comparison to the foolish love of sportsmen for pretty young women. One of its many bold statements that challenges the conventional wisdom of the day and defies the viewer to accept it on its own terms is when it bellows out its theme that “Beauty always strives for self-destruction.”

Passions is set at a seaside hospital and at a lush horse farm among a bunch of chatty Fellini-like character onlookers, who are intensely engaged throughout in a gabfest about such things as beauty, horses, the circus, centaurs and love. An often repeated question, one that’s never answered, is raised among the sporting experts about “Who wins the race, the jockey or the horse?”

The flighty blonde nurse Lila (Renata Litvinova) attends a wounded jockey and calls herself “A flower above and below water.” The brunette Violetta (Svetlana Kolenda) is a vain circus performer, who can’t fully accept being told over and over by jockeys and trainers that “the circus horse is inferior to the thoroughbred” and that “Dogs are prose and horses are poetry.”

The unconventional, personal and arty film is not for everyone, as Muratova’s artful way of showing love to the horses and getting at the intrigues found in horse racing demand that the viewer bet everything on her opinions winning the wager. It’s likable for the rich racing atmosphere created and the feeling that all its silly idiosyncratic touches might actually lead to something rewarding if pondered in a serious way. 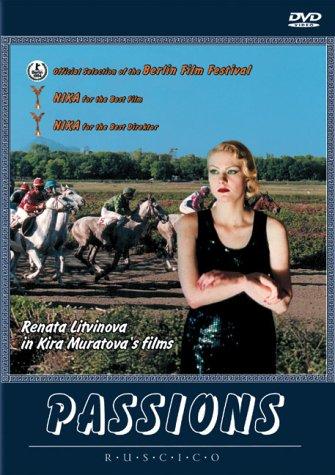