W.S. Van Dyke directs the third film in the MGM series and the final one to be based on a Dashiell Hammett story. It’s as wacky and entertaining as the others in the series, featuring upper-crust private eye Nick and his lovely wife Nora Charles (Powell and Loy). But the plot is more complex, which I guess is good for the mystery part but unfortunately takes away a lot of the snappy dialogue from the lush-sophisticated couple. In addition to the Charles’ cutesy temperamental pet canine Asta, featured in the other serials, there’s one year old Nickie Jr., which slows mom down a bit as she has someone else to look after besides Nick. The silly title refers to the baby. The title doesn’t make sense since the “Thin Man” refers to the victim from the first mystery in this series, and it could only make sense if it now by some change of meaning refers to William Powell (which might be a hard sell because Powell is not thin).

“Another” does not excite as much as its forerunners because the screenplay has too much chicanery for its own good and it’s so overwritten that the story becomes tedious because of all the needless complications over three murders. It also lags in parts because Nick takes too long to get to the bottom of all the mischief afoot and the couple’s famous repartees don’t have as much fire in them as before. To make the guessing of the murderer more difficult, it uses the Charlie Chan ploy of the least likely suspect being the guilty party.

Nick and Nora are requested to spend the weekend at the Long Island estate of wealthy munitions industrialist Colonel Burr MacFay, a friend and former business associate of Nora’s father. MacFay is frightened that an ex-business associate Phil Church, who just got out of prison after serving a ten year sentence for fraud, is going to kill him. The twisted engineer, Church, becomes a neighbor and threatens MacFay that he dreams of him with his throat slit open. Church repeatedly makes threatening calls envisioned through his dreams, but the police say they can’t arrest him for his dreams. Church uses his loyal servant Dum-Dum to fake dying on the road, as he has the Colonel so frightened his estate is guarded like a military compound when Nick and Nora are driven there by MacFay’s chauffeur. Soon after their arrival, the pool is set on fire and the huge dog of MacFay’s adopted daughter Lois is found with his throat slit. MacFay has reason to be concerned, because Church was his engineer who did some shady things while he took no risks and made huge profits as the boss.

Also staying at the estate are the mustached Freddie, MacFay’s secretary, who secretly pines for Lois. Dudley Hornwho is engaged to Lois, always seems nervous and unsure of himself, becomes a suspect since he might be a gold digger. The housekeeper is Mrs. Isabella Bellam, whom we will later learn is secretly Lois’s real mother and had an affair with the Colonel. The nanny to Nickie Jr. is Dorothy Waters, who has just been hired by the couple through the agency. It’s later learned Waters has a prison record. She disappears after MacFay’s murder takes place in the house where not a sound was heard even though a scuffle seemed to be taking place, as the furniture was found rearranged in a disorderly way. To complicate things further, there’s a heavy-set man called Diamond Back Vogel hiding in the bushes by Church’s house. When questioned by Nick, he poses as an undercover cop. He’s really a racketeer who is watching Church as a favor for his prison inmate buddy. Church has taken up with Mrs. Smith, who is the inmate’s wife. Smitty as she’s called, is in on the master plan of Church’s to scare MacFay and get away with murdering him. Why he wants to do that, is the direction this whodunit is going. Church aims to set himself up as the most likely suspect but is also careful to have the perfect alibi when MacFay is killed. He figures you can’t be tried for the same crime twice. But the best laid plans don’t often work.

The plot felt like it belonged to a Charlie Chan whodunit. But the film was at least twenty minutes too long for a Chan thriller. I suspect Charlie would have had this case sewn up at the 85 minute mark.

The most screw-ball comedy scene is when one of Nick’s underworld acquaintances, Creeps, decides to give Nickie Jr. a birthday party in the New York hotel the couple is staying at after returning from Long Island and they are still puzzled over the two dead men found on their weekend vacation. Shemp Howard from The Three Stooges plays a criminal named Wacky who wants to attend so badly, that he rents a baby for a few hours in order to be admitted. 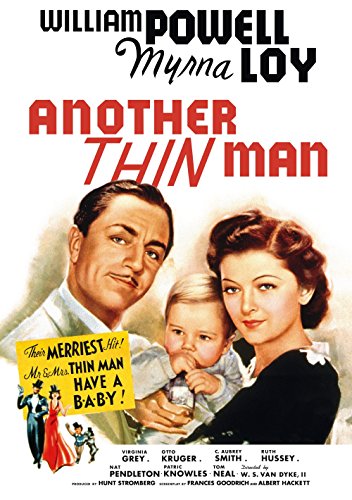