“Illuminating, eloquent, harrowing and, at times, surprisingly humorous account of the untold story of the Nazi persecution of homosexuals of the Third Reich.”

“Paragraph 175” benefited greatly by its use of invaluable archival film, well-preserved family photographs, its lively photographs of gay and lesbian culture blossoming during the days of the Weimar Republic after WW1, and a sensitive low-key narration of the historical facts by the British actor Rupert Everett. It takes its title from a portion of the German penal code enacted in 1871. It was an obscure German law that outlawed homosexuality, but was never enforced until the Nazis came to power in 1933. The penal code stated: “An unnatural sex act committed between persons of male sex or by humans with animals is punishable by imprisonment; the loss of civil rights may also be imposed.”

Because lesbians were considered “curable,” and women were regarded by the Nazis as vessels of motherhood (increasing the German population was one of their top priorities), they therefore were exempt from mass arrest. Though it’s reported two lesbians were sent to concentration camps. Some chose exile; others entered into marriages with gay men. One woman, Annette Eick, who was lucky enough to escape to England, tells her story in the film.

Oscar-winning filmmakers Rob Epstein and Jeffrey Friedman (“The Celluloid Closet”/”The Times of Harvey Milk”/”Common Threads: Stories from the Quilt”) continue on their mission of exploring 20th century homophobia with this illuminating, eloquent, harrowing and, at times, surprisingly humorous account of the untold story of the Nazi persecution of homosexuals of the Third Reich.

The idea for Paragraph 175 began after a meeting of Rob Epstein and Jeffrey Friedman with historian Klaus Muller, a project director for the U.S. Holocaust Memorial Museum in Washington, D.C.; Muller had been researching the persecution of homosexuals under the Third Reich. In the film, he becomes the interviewer in Germany. The documentary is built around the moving and striking accounts of six elderly and mostly frail survivors of the concentration camps. Reportedly there are only ten such survivors still alive, who have repressed their story and kept silent for over 50 years encouraged to do so by a society that didn’t want to know about the past. Gad Beck is the Jewish gay resistance fighter who posed as a Hitler Youth member to rescue his lover from a Gestapo transfer camp in an ultimately futile effort; Albrecht Becker is the photographer arrested and imprisoned for homosexuality, who upon his release joined the army because of the lack of men in his hometown and he “wanted to be with men.” Heinz F. was freed from a sentence at Dachau only to be interned again at Buchenwald. Heinz Dörmer recalls hearing an unforgettable “singing forest” — the agony of gay men subjected to torture by the Nazis. Pierre Seel, a Frenchman imprisoned from Alsace, breaks down after telling of being raped and subject to inhuman torture. These men put a human face on the gay persecution and made you care about them as fellow human beings with the sharing of their haunting images and their resiliency in the face of such cruelty.

The pink triangle, now a universal gay symbol, was used by the Nazis to identify homosexuals, as gold stars were used for Jews, red triangles for political prisoners, brown triangles for gypsies, and so on. Between 1933 and 1945, some 100,000 men were arrested for homosexuality, roughly half of them were sentenced to prison and from 10,000 to 15,000 were sent to concentration camps. The camps were used for re-education, slave labor, castration and sadistic medical experiments. It’s believed only about 4,000 survived their ordeal. But their ordeal was not over after the war, as many survivors were subjected to ongoing persecution, some of them were even re-imprisoned. Paragraph 175 remained a law in force until it was repealed in 1969 and homosexual convictions continued in West Germany until that time. The Nuremburg trials of 1946 never included prosecutions for gay persecution, and the Holocaust research ignored it and, even currently, the German government does not recognize homosexuals as Nazi victims. This is reason enough to thank the filmmakers for bringing this subject to the attention of the world and telling the powerful personal stories before the last survivor dies, as it’s imperative for history to record such horrible events in all their unvarnished ugliness. 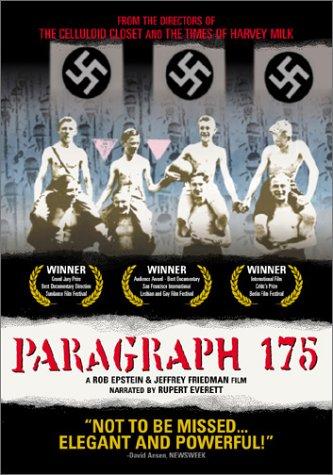