“The good comical premise goes astray when things become too corny and predictable.”

Edward Buzzell (“Easy to Wed”/”Song of the Thin Man”) uses a light touch to direct this screwball comedy revolving around mistaken identities. It’s based on the novel Three Men in the Snow by Erich Kästner and written as a mild class war satire by George Oppenheimer, Harry Ruskin, Dalton Trumbull, Gladys Unger and Irma von Cube.

The smug multi-millionaire Austrian owner of the Tobler Soap Company of Vienna, Rudolph Tobler (Frank Morgan), uses the alias of Edward Schultz to finish in second place in a slogan contest for a radio program he sponsors. The prize is an all-expenses two week vacation in the Austrian Alps and a room in the luxury Palace Hotel. Tobler goes there incognito as Schultz, and brings along his butler Johann Kesselhut (Reginald Owens), as he hopes to see how the common person lives. His overbearing housekeeper Mrs. Kunkel (Edna May Oliver) gets wind of this and fears her boss is too old and sick for a ski vacation and calls up the manager of the Palace, Mr. Bold (Sig Rumann), to pamper him on his arrival with special treatment and she will generously reward him. Instead, when their phone conversation is suddenly halted, the manager thinks she’s referring to the first-prize winner, Fritz Hagedorn (Robert Young), the unemployed bloke who barely survives by winning 26 contests. As a result Fritz gets the best suite in the hotel and is treated like a king. On the hand, Schultz because of his shabby looks is treated with disrespect and given an unlivable room.

Mrs. Irene Mallebre (Mary Astor) is a divorced fortune hunter, who initially makes a play for Fritz but goes after Schultz when the social climber figures out he’s the millionaire. Meanwhile Tobler’s unmarried attractive daughter Hilde (Florence Rice) joins the housekeeper at the Palace Hotel. Hilde wants to ensure her dad is enjoying himself, while Kunkel wants to drag him home. Unexpectedly Hilde and Fritz meet on the slopes and fall in love, and she pretends to be poor not wanting to lose him. When Fritz finds out the truth and feels insulted, Tobler buys him off with high paying executive job. But the feelings of love overcome his doubts, and the happy ending is completed when Tobler dumps the much younger gold digger and finds a way to block her attempt to sue him because of a breach of promise to marry. The good comical premise goes astray when things become too corny and predictable. But there’s yodeling, Siamese cats, brandy, bumbling hotel workers and a glimmer of romance to behold when all else goes down hill. In Great Britain the film was called Romance For Three. 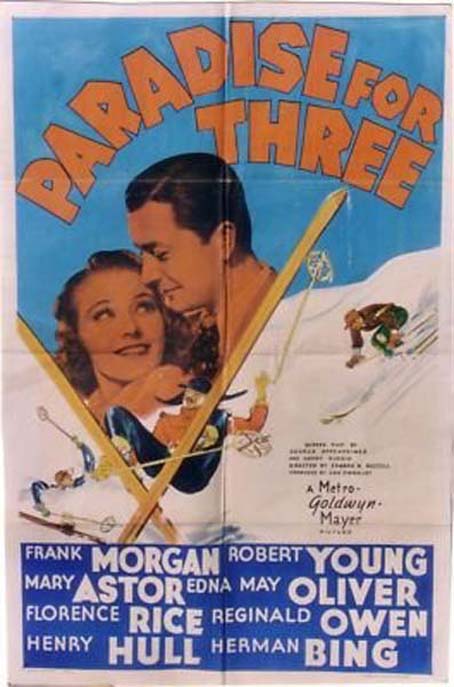 ADVENTURES OF TARTU, THE