A “Home Alone” film that is staged like “Rosemary’s Baby,” but is not as well-conceived as either of those. David Fincher (Alien 3/Fight Club), who is on a downward spiral ever since his 1995 Seven, directs this suspense thriller with a workmanlike efficiency but with little else to offer the viewer except an exercise in clichéd horror contrivances. Fincher provides more unpleasantness than he does suspense, and after the manipulative story is resolved one wonders why it had nothing to say but dragged on with its predictable and thin story by plying as much gratuitous violence as it could until the gory final moments.

The film is set in Manhattan and the star is not an actor but the spacious luxury brownstone on the exclusive Upper West Side, where Meg Altman (Jodie Foster) and her young daughter Sarah (Kristen Stewart) move to from suburban Greenwich, Connecticut. She has recently separated from her pharmaceutical tycoon husband Stephen (Bauchau), who is living with another woman in her neighborhood. One of the brownstone’s unique features is a panic room or a safe room, that a grumpy real estate agent (Buchanan) tells her is a feature that adds peace of mind in these dangerous times because it is impenetrable. It’s a high-tech steel-fortified room, much like a bomb shelter, that can’t be broken into. It also has a separate ventilation system and phoneline that can’t be cut from the main house, and is not effected by a power outage. It was installed by the previous owner, who seemed to be paranoid about security.

On their first night of occupancy in the four-story elevator equipped brownstone, three intruders break in who want to pilfer the millions of dollars in the safe located in the panic room. It was secretly left by the previous owner, but Meg is still not aware of the hidden safe. The burglars include the following: the one who knew about the safe because his relations lived there, Junior (Jared Leto), a punky and volatile rich kid gone bad who is sporting a hairstyle of cornrows; the one who helped design the panic room for the security firm that employs him, Burnham (Forest Whitaker), a pathetic but complex man still dressed in his coverall work uniform, who needs money because he’s in a custody fight — his only humanity is that he opposes any plan that involves violence; and, the third party dressed in a black ski mask is Raoul (Dwight Yoakam), a psychopathic menace bent on violence, who was unexpectedly recruited by Junior to Burnham’s displeasure. This oddly mixed trio, a gross group to watch in action, argue among themselves in a black comedy manner about how much dough is in the safe, how to split the booty, how the rules of escrow are set in real estate, and how to get into the panic room where mother and daughter have retreated.

To make things seem more contrived than they should be: the hostages are both very nervous and are bumblers; Meg didn’t connect the phoneline in the panic room and therefore can’t call the police; and, Sarah must get periodic insulin injections for her diabetic ailment or else she might die.

There are numerous Sony security video surveillance cameras covering many rooms of the house so that the hostages in the panic room can watch their tormentors operate (that prolonged freebie ad is no accident since Columbia and Sony are part of the same financial family).

Fincher’s main skill is in the marvelous tracking shots he comes up with and how his camera can go all over the house, and how he gets some interesting shots through the keyhole and over the banisters and even under the floors. But we never get to care about the characters in peril, and the story seems all too familiar. It plays as a conventional genre story and the actors can’t get past the stock characters they represent despite trying to squeeze something more out of their roles than is there. They don’t give bad performances, as much as they give uninteresting ones–failing to get us to believe in them.

So Fincher can be praised for his filming techniques, but that’s not enough to make this a satisfying viewing experience. The only thing I got out of this confining film, was a chance to see how the wealthy live in New York City. It was a primer on the real estate market for the wealthy, and it let me have a tour of a house I could never afford. But the dismal narrative was a bummer, filling me only with grim images.

As a note to those who like odd facts about a movie: the writer of Seven, Andrew Kevin Walker, can be seen in a bit part as the sleepy neighbor, and Nicole Kidman turned down the Jodie Foster role (she was either smart or lucky). 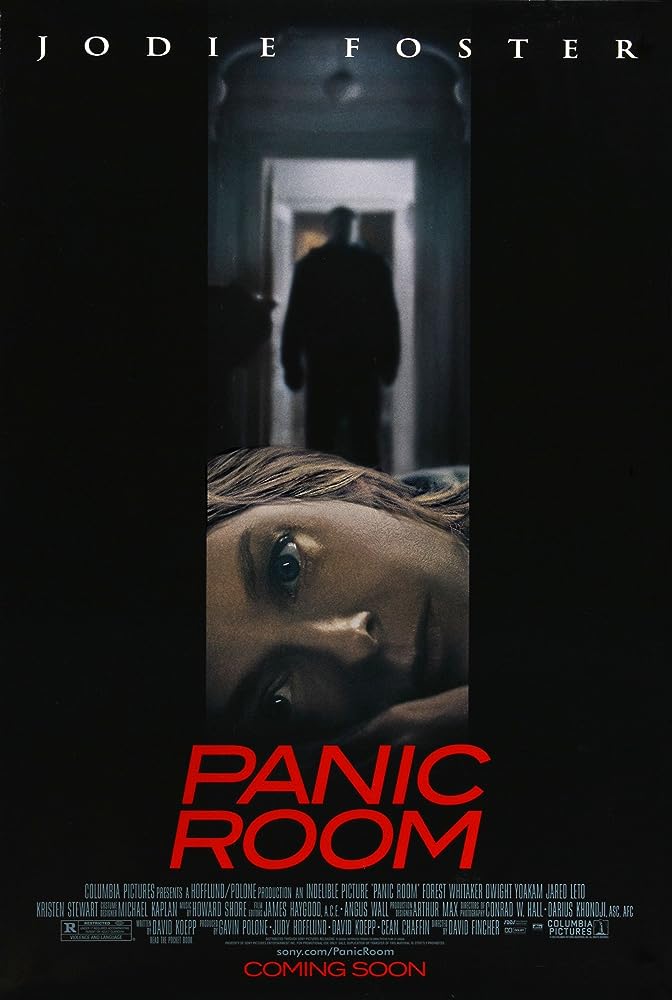