PANIC IN NEEDLE PARK, THE

Gritty, bleak and intimate urban drama about doomed junkie lovers in Manhattan, that highlights addicts in long close-ups cooking the stuff, shooting it up and the after effects of the high on them–something not done in mainstream films at the time, thereby giving the film an arty documentary style look. It covers the turf around New York City’s Sherman Square on 72nd Street and Broadway that the locals refer to as “Needle Park” because it has been overrun by junkies. “Needle Park” made its mark during its day, but is outdated and its acting once praised for its realism now appears as more a Method Acting job by Al Pacino, the then 30-year-old, in his starring debut.

It’s based on a mid-’60s Life magazine story and, later, a book by reporter James Mills. The screenwriters Dominick Dunne and Joan Didion keep it hopping as an anti-drug film that can’t resist getting down and dirty with the drug scene and then becoming preachy about how destructive is the habit. Director Jerry Schatzberg (“Scarecrow”/”The Seduction of Joe Tynan”/”Honeysuckle Rose”), a former fashion photographer, uses hand-held cameras to capture the street scene guerrilla style and shows a sympathy for the addicts by humanizing them, but these anti-social and untrustworthy characters are not the kind of people straights would care to cross paths with and they never come across as lovable sorts the viewer could sympathize with no matter how much the director thinks he can play with the viewer’s emotions.

It opens with a hurting gentle Indiana transplant named Helen (Kitty Winn) returning home by subway to her artist boyfriend Marco (Raúl Julia) after a botched illegal abortion in someone’s apartment. While Helen is curled up on a couch in pain, junkie and petty thief Bobby (Al Pacino) sells the artist heroin. The next day Bobby visits Helen in the hospital to tell her Marco split. The two hit it off and move in together in his Needle Park pad. But his heroin addiction dooms their love, as he comes too busy trying to score smack that he neglects her sexually and emotionally.

When Bobby returns again to prison after nabbed in a burglary to get money for the soaring price of smack, Helen in his absence turns to heroin for comfort and to prostitution to support her habit. She also sleeps with Bobby’s burglar brother Hank (Richard Bright). When loser Bobby goes cold turkey in prison and then returns from prison on parole, the couple go full blast into a downward spiral of deprivation that ends in hell.

Helen is caught peddling pills to school children and an arresting narc officer named Hotch (Alan Vint) offers her a deal of no jail time if she rats out her pusher hubby. Since Helen has become like all the other junkies in her crew, she’s lost any scruples and will betray even those close to her in order to survive.

It’s a tragic love story set in the sleazy confinements of the junkie underworld. But it never resonates as anything deeper than a dreary tale about dullards who are injecting themselves with dirty needles and just seem to be too out of it to leave us little choice but feel repulsed by their action without being given anything else to comprehend about their downfall except that getting hooked on such hard drugs seems like an easy thing to do but a difficult thing to kick. It tells us this in a more arty way than a public service announcement, but basically has the same purpose. The film seems to me like a curio shocker from the 1970s, that when the shocks fade there’s not much there to get a high from. 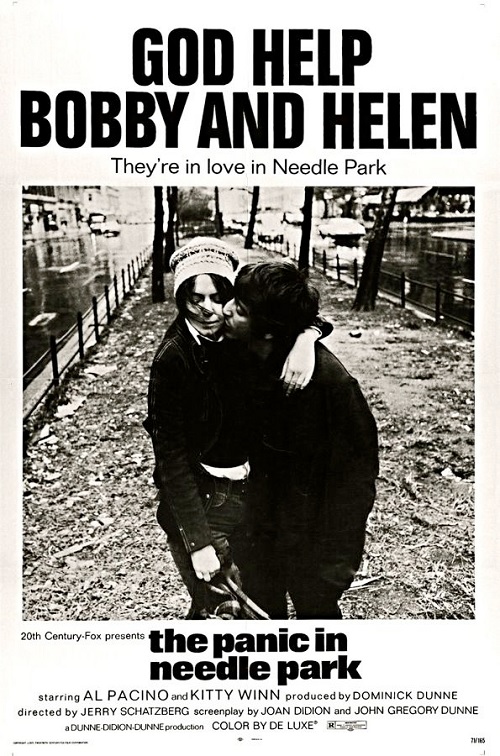