Codirectors George Marshall and Raymond McCarey helm this second feature that stars the comical team of Laurel and Hardy, whose title is derived from the popular song from World War I “Pack up your troubles in your old kit bag and smile, smile, smile.” The uneven comedy, written by H.M. Walker, who freely borrowed the story line from the hit Charles Chaplin movies Shoulder Arms (1918) and The Kid (1921), has enough original slapstick bits that work to patch together a pleasing blend of comedy and melodramatics. It’s the sentimentality, rare for a Laurel and Hardy film, that keeps their fan base purists from fully appreciating this underrated one.

While sitting on a park bench, a tough recruiting sergeant drafts the reluctant idlers Stan (Stan Laurel) and Oliver (Oliver Hardy) into Uncle Sam’s army just as WW I is declared in 1917. The boys have trouble getting the hang of marching and are given KP. Not knowing where to throw the garbage, the bad-tempered cook (GeorgeMarshall, codirector), facetiously tells the boys to deliver it to the general (James Finlayson). When they do, the cook and the boys end up in the brig–with the irate cook vowing to get them the next time they meet.

The doughboys end up in the trenches in Flanders, where they bunk with Eddie Smith (Donald Dillaway). Eddie’s killed in battle and the boys, when the Armistice is declared, vow to return his abandoned toddler (Jackie Lyn, the 3-year-old British girl already appeared in a number of Hal Roach shorts and was a member of his “Our Gang” comedies) to her wealthy grandparents, as Eddie’s unfaithful wife ran off with another and left the baby with miserable strangers (Rychard Cramer & Adele Watson) who mistreat the kid. Eddie and his parents had a spat about the kind of trampy girl he married and didn’t accept the marriage, therefore he never told them about the child. The boys must first fight the worthless strangers for the child, as the state gives them money for her care and the slackers don’t wish to lose that support. When they possess the girl the boys then have great difficulty in locating the adorable little girl’s grandparents, known to them only by the last name of Smith. The boys put all their energies into scouring the New York City phone directory and ring the door of many wrong parties named Smith. Some wrong numbers bring on very funny scenes, such as breaking up a wedding party when the would-be groom (Grady Sutton) is accused of being the orphan’s father.

One of the film’s best gags has the 3-year-old tell Uncle Stan a bedtime story of “The Three Bears’ and he goes to sleep instead of the other way.

“Pack Up Your Troubles” was remade with Abbott and Costello as Buck Privates Come Home (1947), which was not as funny as this one. 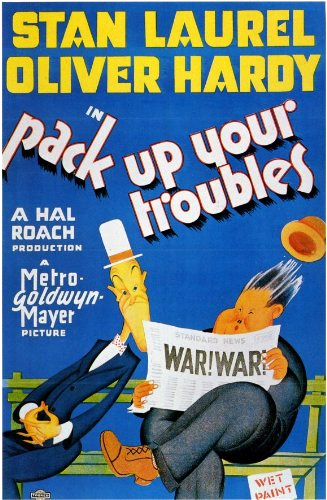