With much gusto veteran French filmmaker Robert Florey(“Johnny One-Eye”/”Danger Signal”/”The Desert Song”) directs this B story French Foreign Legion adventure story. It helps that the film was shot on location and received the full cooperation of the French Foreign Legion, but the story by Joseph N. Ermolieff is rather limp. Also limp are the screenplay by Charles Grayson and Paul de Sainte-Colombe. It also doesn’t help that its star, George Raft, acts as if he would rather be in Brooklyn than filming in Morocco. Furthermore, the film lacked originality and several scenes were outlandish Hollywood takes on desert life in Morocco, taking away its credibility.

It’s set in post-World War I French Morocco. The French Foreign Legion commander Col. Pascal (John Litel) picks Capt. Paul Gerard (George Raft) for a special mission: he is to lead a small division to escort Cara (Marie Windsor), the daughter of the Emir of Bel-Rashad (Eduard Franz), to her home and to investigate if the Emir, an enemy, is planning an attack on a nearby French outpost. The womanizer Gerard’s native manservant Bamboule (Ernö Verebes) gives him the colonel’s message while he’s dancing the tango with Cara in a nightclub. It is only on the next day while leading the convoy that Gerard discovers his dancing partner was Cara. The striking girl has fallen in love with the Captain.

What should have been an exciting adventure story was dull, even if solidly filmed by Florey. This film contributed greatly to the rapid downfall of the aging George Raft’s Hollywood career.

The one bright spot is Akim Tamiroff, Raft’s second-in-command, who steals every scene he’s in. 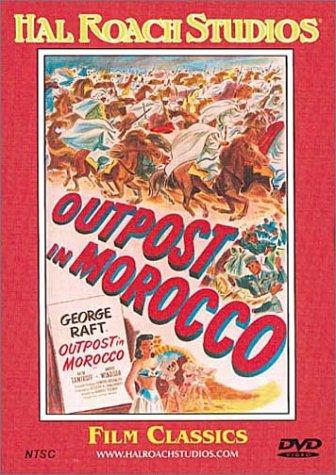