“This is a film made for purists of the cinema.”

One of the really haunting films of the 1990s. A film about a life hitting a wall and taking the starch out of a young person’s sense of being. It is so painful to see what existence means and doesn’t mean to a teenage girl, that it is hard to look at this film without thinking of it as a documentary. Its underlying theme is about the impossibility of leading a moral life and being moral, that no matter what one does existence supersedes everything else. This unusually bleak look at the desperation of a young girl’s life won top prize, the Palme d’Or, at the prestigious Cannes Film Festival. Emilie Dequenne, the 18-year-old star, shared the best-actress award. She played the role with conviction and gave a truly unforgettable performance.

The Dardenne brothers have made an urgent film about today’s job market that hits home on its theme of universal pathos and how those on the bottom are taken advantage of by unfair employment practices. A young girl can’t maneuver out of the poverty she was born into. It’s a theme that forces you to look at the young girl in an introspective way and at her poverty as something that is real and not something that can be dismissed by other distractions in the story. Rosetta’s life is more reflective of how ordinary Americans manage to scrape by and actually exist, than in all the ludicrous themes of the escape films most Americans flock to see that pretend to cover that subject. This film is rich in all the things about life that Hollywood chooses to gloss over in its need to get a blockbuster. Its star does not exude beauty and is not faced with episodic adventures. It is the triviality of her life, watching her everyday movements, as she changes her shoes, cuts her French toast, sells her old clothes to get money, skirts the traffic as she crosses a highway, which gives this film its realistic flavor.

Rosetta angrily comes home after being fired from her job at a factory, even though she considers herself to be a good worker. No reason is given why she is fired, but it upsets her so much that she lashes out at her boss and has to be restrained by the police. We follow her strident movements as she takes a bus home and then crosses a highway to a wooded area where she removes a rock from a hole in the ground and takes off her work shoes and replaces them with boots she keeps in the hole. Her trailer is just outside some unnamed small town.

At home Rosetta accuses her mother of getting drinks from another trailer park resident, saying that he only gets her drunk to f*ck her.

A hand-held camera is steadily focused on the young heroine and follows her around as she goes fishing in a muddy creek near-by. To relieve her hunger pains before going to sleep she uses a hair-dryer blower over her belly. Her life is an unusually lonely one for a teen-ager, and she has no responsible adult to help her.

A young man, probably the same age she is, Riquet (Fabrizio Rongione), with romantic designs on her, who works at a Belgian waffle wagon stand, comes by her trailer park by motorcycle. Her first reaction upon seeing him, is to angrily knock him off the bike. But as they wrestle in the ground he tells her, “There’s a job available, my boss fired someone.”

Rosetta’s way of seeing things has become so chilling that she never allows herself to loosen up and welcome the young man’s attention, regarding him only as a rival for a job she wants. She goes to Riquet’s place for French toast and a beer, and cracks a smile for the first and only time during the film, as he tries to show off doing some gymnastics and clumsily falls. After she is fired from this job of making waffles because the boss’s idiot son returns to work, Riquet visits her and falls in the muddy creek trying to retrieve her fishing line and is sinking in the mud; and, she thinks of letting him drown in order to get his job, but reluctantly saves him. When he offers her a job moonlighting, in a scam he is working on the boss (Gourmet) of selling waffles he makes on his own, she turns him down telling him she wants only a regular job. Then she does something that many would consider reprehensible though morally correct, she drops a dime on him and tells the boss of his swindle. The boss immediately fires him and hires her.

The Dardennes (La Promesse)are veteran documentary filmmakers of leftist leanings, with a penchant for making films about social problems. They have created a masterfully perfect visceral film, that is unflinching in its realism and unsentimental in its study of her. What makes this film so uncompromising and ironical is that we are not asked to like or even accept Rosetta, we are only allowed to understand that she does what she has to in order to exist. Isn’t that the way life really is, anyway?

It is difficult to remove from one’s memory Rosetta’s prayers for normalcy uttered to the invisible person she pictures herself sleeping next to as she goes to sleep, telling herself “Your name is Rosetta, my name is Rosetta. I found a job, you got a job. I got a friend, you got a friend. I will not fall in a rut, you will not fall in a rut. I will lead a normal life, you will lead a normal life. Good night, good night.” This is the study of someone desperately trying to become the somebody she pictures for herself. In many ways her story is ours, there are no national borders to separate us from such agony.

This film fully focuses on Rosetta’s point of view, of her life and death struggle. It is one that must strike at the heart of society that allows such employment injustices to exist without doing something to correct things (as a result of this film, the Belgian government did pass a more favorable labor law, which it called “Rosetta’s Law”). There is nothing more important for most people in the world than in securing a job, and there are very few films that take the pains to show that getting a job is so serious a matter.

I think that the film critics who downplayed this film into the minor category because of its lack of action and supposed tedium, missed a chance to see a film that had much more to offer than the usual type of escapist entertainment fare. This unique film is devoid of any philosophy, it is even vastly different in tone from Bresson’s “Mouchette” — a masterful film it is most closely akin to. Bresson had too many religious and Catholic agendas in his film to achieve the starkness this film does. This is a film made for purists of the cinema. It is society’s mistake if they make someone like Rosetta invisible, and it is our mistake as filmgoers and critics if we ignore films just because they bring up unpleasant subjects and we don’t feel entertained by them. To be so prosaic in our viewing habits as that, we would be on the same slippery footing as Rosetta and striving for the same kind of ridiculous ‘normalcy’ she was after. 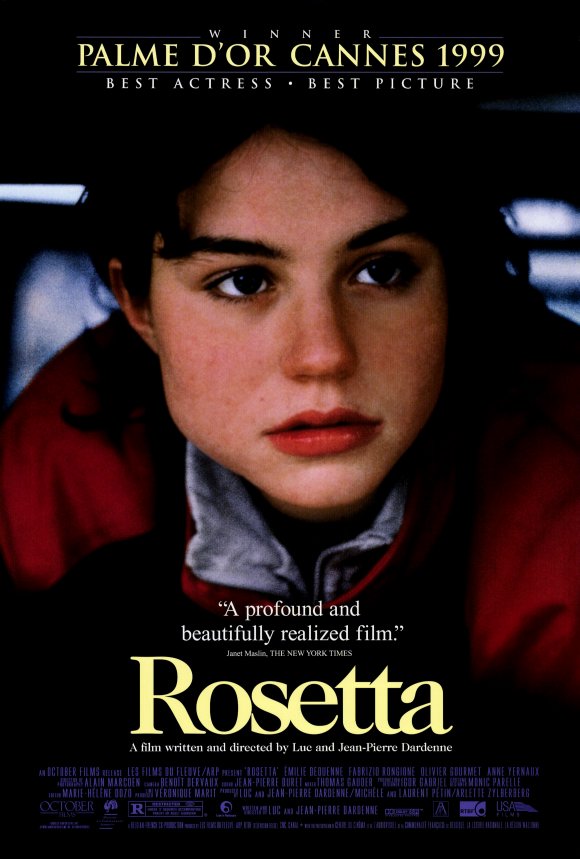