It’s a good chance for those not acquainted with the then 93-year-old Portuguese filmmaker, born in 1908, Manoel de Oliveira, to catch his 35th film, a brief 62 minute documentary he shot bringing back memories of growing up in Oporto. The film is more suggestive than concise in its unfolding biography, as it acts mostly as a link between his hometown roots and his passions as a young man growing up in upper-class status (his father was a prominent industrialist).

In a touristy way we see Oporto as it is now in Technicolor and through black and white film as it was back in the 1920s, when Manoel was a university student hanging out in risqué dance clubs with his poet friends (showing reenactments). Oporto is pictured as the historical city that gave birth to the liberty of the nation, as in 1832 King Don Pedro’s soldiers landed there and brought liberation. Since then it has a rich history in producing a fair amount of poets and activists urging the country to become a republic.

In this tribute to the revered filmmaker, he recalls as a youth attending an illustrious opera house; a tender innocent childhood kiss with his first girlfriend; taking after-dinner strolls with his family and society members through the lovely town garden; hanging around with older bohemians who philosophically conversed and were girl watching as they leaned against a store railing; and waxing poetic about a great cake shop no longer in business.

It’s all very elegant and the recreations are done with a good humor. The filmmaker’s childhood impressions are of mostly trivial things that seem to mean a lot to him more than the viewer could realize. His best quote on how he was as a child has him stating “I saw myself as naturally as I had seen the actors in the theater.” It’s a must-see for his fans, others might take delight in how such insignificant but endearing memories can still be so much a part of one’s life, even into a ripe old age. 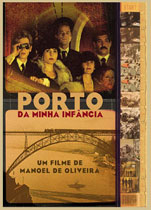