ON THE OLD SPANISH TRAIL

One of the weaker Roy Rogers cowboy films. It’s a whimsical tale with too much lighthearted comedy and songs and not enough action. William Witney (“Bells of San Angelo”/”The Gay Ranchero”/”Trigger, Jr.”) directs and Sloan Nibley adapts it from the story by Gerald Geraghty.

It’s set in modern times. Roy Rogers while working for the Great Southwestern Tent Show finds out from a sheriff in Sioux City, Iowa, that a man named Burnett is coming to collect on the $10,000 loan that rancher Rogers countersigned with show performers Bob Nolan and The Sons of the Pioneers. Burnett will confiscate their show equipment if they cannot pay, but agrees to give them a few weeks in which to raise the money. Soon Roy discovers one of the performers, Candy Martin (Jane Frazee), has a love poem from a gypsy named Ricco Perado (Tito Guizar). Roy’s sidekick, Cookie Bullfincher (Andy Devine), then tells Roy about a $10,000 reward for the capture of a gypsy who has been robbing oil companies of their payroll funds. Roy discovers that their show was in the area of all the robberies, and captures the gypsy to collect the reward and thereby pay off the loan. But he soon believes the gypsy is innocent. It leads to the climactic scene, where after staging a mock holdup for the show Roy discovers that all the villainy was committed by the gang led by one of the showmen, Harry Blaisdell (Charles McGraw), Candy’s boyfriend. That gives way to the film’s only exciting moment: Roy chasing down the robbers on a runaway stagecoach and proving that the gypsy was innocent. With that, the gypsy takes off with his hot tamale senorita Lola Gitana (Estelita Rodriguez) and the salvaged tent show moves on to perform in the next city. Singing cowboy Rogers, known as the “King of the Cowboys,” ends the dull venture by singing the dull title song. 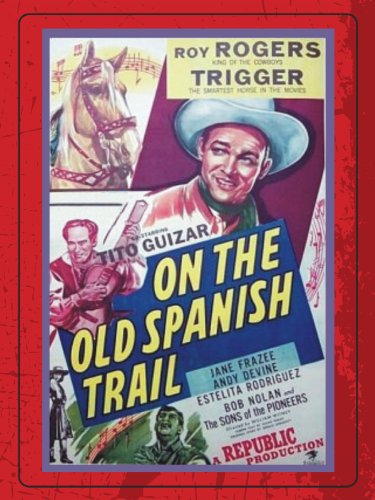