“Smart and glossy, but it has too many sluggish moments to maintain its few high points.”

Playwright Tom Stoppard adapts to the screen John le Carre’s minor glasnot spy novel. Skilled filmmaker Fred Schepisi (“Roxanne”/ “Barbarosa”/”Six Degrees of Separation”) keeps it smart and glossy, but it has too many sluggish moments to maintain its few high points. The talented cast do their best with the given material and Sean Connery gives a great performance and the location shots of Moscow and Leningrad are well chosen and there are times the thriller bristles with excitement, but it never fulfills its ambitious pretensions to reach greater heights than just being predictable spook stuff.

An unidentified Soviet writer, actually a dissident high-ranking genius Soviet physicist, using the alias Dante (Klaus Maria Brandauer), sends through a Moscow book editor life long friend, Katya Orlova (Michelle Pfeiffer), an unsolicited manuscript containing valued evidence that the Russian defense system is inefficient and other damaging info on the capabilities of their nuclear program to, of all blokes, boozy, jazz lover, free-spirited, Russian people loving, bargain-basement lowly British publisher Barley Blair (Sean Connery). Since Barley was a no show at the Moscow fair, Katya takes a chance and gives it to a publisher colleague (Nicholas Woodeson) of his at the fair. He turns it over to British Intelligence, whose head investigator, Ned (James Fox), has his agents locate Barley in Lisbon and they bring him back to London to work for them as a spy. His mission is, through his contact with go-between fading beauty Katya, to find the identity of the Russian author of the manuscript, someone who chose him because he was charmed by his honesty and openness at a writer’s conference in the Soviet Union. Because nuclear plans are involved, British Intelligence gets the American CIA, with Russell Sheridan (Roy Scheider), Ned’s politically tuned in counterpart, to take charge of the spy operation. After the spy agents determine that Dante is a straight-shooter, they press Barley into service to act patriotic. But the unreliable Barley falls in love with Katya, who risked her life and her family’s to act as a go-between, and he thinks he’s doing the first decent thing he’s ever done by betraying his country to act on personal interest: choosing her safety over his country’s needs.

The plot was needlessly made complex by keeping things muddled, and the rosy ending was a bit of a stretch. But despite all its low points, it was still entertaining and makes a point that one can’t repeat often enough of how the cold-blooded bureaucratic men in the grey suits keep the arms race going above the clamor of those who want the world to act more rationally when it comes to weapons of mass destruction.

Director Ken Russell has a spicy part as a busy Brit spook Soviet code expert, who walks off with supporting actor honors. Pfeiffer proves she can act subdued and makes the most of her part as the straight-arrow family woman Connery falls for in an adult way. Other supporting actors fare less fortunate because their parts leave them without much to do or say, such as J. T. Walsh’s sinister one-dimensional Colonel Quinn. 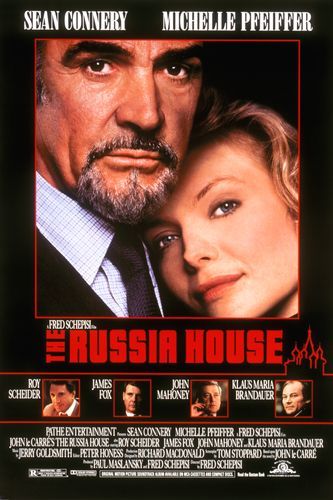