ONE TOO MANY (MIXED-UP WOMEN)

“Though filmed as a bleak soap opera, it comes with a happy ending.”

The title refers to an alcohol problem for a former classical pianist who is now a housewife (Ruth Warrick). Her life is destroyed until saved by joining Alcoholics Anonymous. Warwick’s realistic performance makes the film watchable. Forgotten journeyman director Erle C. Kenton(“House of Dracula”/”House of Frankenstein”/”Island of Lost Souls”) is known for some good horror films, as well as many schlock films. In his last film, he does an adequate job putting together this social message film. Though filmed as a bleak soap opera, it comes with a happy ending.

The story was written by schlocky horror producer Kroger Babb.

Robert Travis plays Ruth’s reporter husband. Rhys Williams plays a bartender, who is an AA-member supporting Ruth in her effort to recover. Thurston Hall plays Robert’s stuffy newspaper boss, who has no tolerance for those with drinking problems until he sees the light.

Scariest moment in the pic has Ruth in the “psycho ward” in a straitjacket. 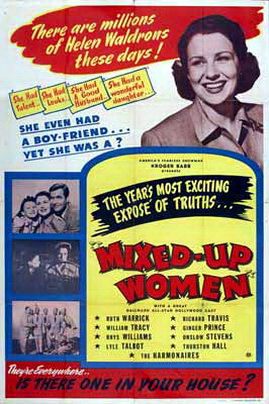