(
“This is Rivette’s most linear and comprehensible film.”

Diderot wrote this novel in 1796, based on a true story about the corruption and evil in the monastic orders. It was the practice of families, even against the will of their children, to give money to the order so that their child could stay forever in the monastery. There was no way out if later on the child was not found suited for this life and wanted to leave. This dreadful condition of life is fully captured by Rivette as he tells this story of woe in a detached and austere way, using the monastery as a metaphor for the corruption and decay of the world-at-large. This film was banned in France during the ’60s for being anti-Catholic.

This is Rivette’s most linear and comprehensible film to date (he co-directed it with Jean Gruault). The unwilling nun-to-be (Karina) learns of her fate after her spiteful aristocratic mother sends her to a nunnery against her will because the mother conceived her illegitimately, and in order to avoid disgracing the family she removes the 16-year-old child from the family. The harshness and dreariness of the story is pervasive, it is filled with so much pathos and heart wrenching evil. Rivette brings breath to the film and keeps out any superfluous material to this already startling story. In his no-nonsense hands, we witness the superstitious beliefs present at the time and how God was a lie these so-called religious practitioners lived.

As Karina joins the monastic order we follow the routines the sisters do and view with horror the sterility of their life. We are horrified even if we realize that life for the poor and the powerless in the real world was also an unfortunate one.

At Karina’s first convent, after her first abbess who tried to offer her some maternal kindness dies, Karina runs into inhumane treatment when the new mother superior finds that she is not willing to be part of their vocation. The lack of compassion and twisted religious concepts become too evident to her, she realizes that she will never be able to adjust to this abnormal life. And since she went into the monastery as a teen-ager, she actually has very little knowledge of the outside world but still feels confident that the outside world is a better choice for her.

A lawyer, retained by those outside of the church who are interested in removing some of the church political powers, argues against her staying in this cruel monastery and tries to get her released from her obligation totally. But the best the church authorities can do, is transfer her to a more humane monastery.

In her new monastery, Karina will next face a lesbian mother superior who desires to have sex with her and a priest who is her confessor, but who has grown dispirited with the church and starts to act strangely aggressive towards her. The priest gets Karina to escape from the monastery with him and then tries to molest her. Her gloom now becomes so great that she cannot find solace in anything, even as she truly searches to find God within herself; and, she will prove by her kind demeanor that she is the only one from the monastery who is truly a Christian. Her plight becomes so horrid, as she cannot adjust to the outside world that she has escaped to, as she finds herself also being sought there as a sex object; and, in her pitiful state, she chooses suicide as the only way out of her misery.

Rivette has made a memorable film, one that towers over other such benign Hollywood films relating to this subject matter. The nun’s tragic plight is told tersely with a perfection of style and purpose; it’s a story that is hard to put out of your mind. 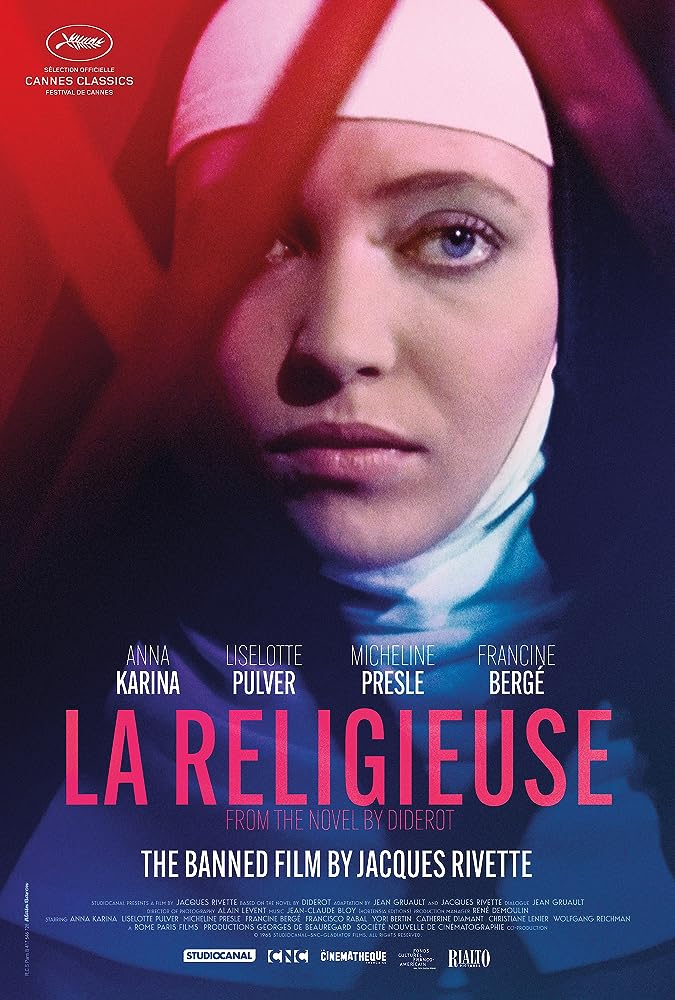