“The once groundbreaking film seems more creepy than important nowadays.”

Expatriate American director Joseph Losey’s (“The Prowler”/”Modesty Blaise”/”Accident”) bid for his first ‘prestige’ film might have upon its release seemed just that–a bold and insidious allegory on the moral decay and hypocrisy of the upper-crusts and how it might seem if the servant changed places with the master, but when viewed today the bleak psychological drama seems rather empty, dated and contrived. Playwright Harold Pinter adapts it from the 1948 novella “The Servant” by Robin Maugham (nephew of Somerset). It was upon its release both an artistic and commercial success.

Wealthy effete wastrel bachelor Tony (James Fox), a land developer, returns from Africa to London and obtains a Georgian two-story Chelsea townhouse. He also hires a seemingly efficient Cockney manservant Hugo Barrett (Dirk Bogarde) to be an all around help, and the servant immediately acts to bring order to the debauched Tony’s chaotic life but in doing so nearly bankrupts his boss by purchasing expensive new furnishings. Gradually the corrupt butler insidiously ingrains his way into his employer’s life and takes charge of the house–turning topsy-turvy their servant-master relationship. Tony’s upper-class fiancée Susan (Wendy Craig) sees through Hugo and feels threatened by the sinister servant, while the unobservant Tony is too fragile to properly react until he finally does take action when he’s at his wit’s end. Hugo, in the meantime, has the gall to pass off his shrill tart acquaintance, Vera (Sarah Miles), as his sister and gets her hired as a maid, and maneuvers to have her take Tony to bed thereby hoping to bring the naive and weak-minded aristocrat down a few pegs in the eyes of his fiancée.

The Servant has a decadent air that explores a human relationship with strong hints of homosexuality. It also offers a role playing power trip through Pinter’s bombastic fractured dialogue replete with cryptic silences and explores how the British class system is beginning to become more shaky in the current revolutionary context. It still sort of works as an intriguing and well-acted perverse relationship drama revolving around class struggle, even though its once grand rep has been much downgraded in recent times and the once groundbreaking film seems more creepy than important nowadays. 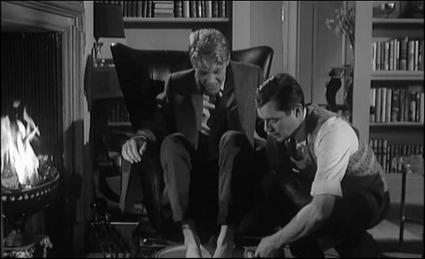