NOT WANTED (aka: THE STREETS OF SIN)

A well-intentioned candid melodrama about an unwed mother’s plight that never produced any sparks though it exposed the social taboos of the time that made many such mothers feel shamed. It’s a problem that this current generation might not relate to in the same intense psychological way, though it’s still easy to understand the financial strain placed on a single mom without support from the family or the child’s father. The film is made by maverick Hollywood star in the ’30s and ’40s Ida Lupino, whose independent film company called The Filmmakers was created for the small but important B-film made outside the Hollywood studio system. It’s directed by Elmer Clifton, but Ida is reputed to have directed most of it after Clifton had a heart attack early on (he died during the film’s release); Ida was also the screenwriter and producer. It’s based on a story by Paul Jarrico and Malvin Wald. After getting her feet wet in this social conscious film, Ida in the 1950s directed such stellar films as The Bigamist and The Hitch-hiker.

The film opens with a trance-like distraught woman named Sally Kelton (Sally Forrest) kidnapping a baby left alone in a carriage on the street. She is soon arrested. While spending the night in jail, the film goes into flashback to a time leading up to this incident. The lonely 18-year-old Sally is living unhappily at home with her nagging mom and downtrodden blue-collar working father (Dorothy Adams & Wheaton Chambers). She works days as a waitress in a cafe; adjacent is a nightclub. Attending the nightclub one night, she’s attracted to the world-weary itinerant piano player Steve Ryan (Leo Penn). They begin a short relationship which means everything to her and nothing to him. He soon leaves for another town, and she surprisingly follows him after a dispute with her mom about a borrowed car. Steve rejects her, claiming he never expected her to follow him and he’s not the marrying kind. Steve soon takes off for South America. Meanwhile Sally met nice guy Drew Baxter (Keefe Brasselle) on the bus ride over and he has hired her to work in his mini-mart service station as a cashier. The confused girl still has a crush on the slick Steve, and hardly gives the gimpy legged (from a war injury) Drew a tumble. But enjoys one evening out with him in the amusement park. When she learns she’s pregnant from Steve, Sally, also, splits this town and ends up in a home for unwed mothers run by Mrs. Stone (Ruth Clifford). Sally accepts her advice to give up the baby for adoption, but as the year passes and she’s alone working at a dead-end job in a laundry she pines for her child. As the film comes out of flashback, we observe that Sally is suffering from a nervous breakdown. The naive woman tells the Assistant DA she only wanted to hold the baby in her arms, and he tells her it’s up to the mother to decide if she wants to press charges. It seems odd that none of the authority figures recognize her delicate mental condition and get her help.

The filmmaker never got me excited about Sally’s problems, though I could understand her tragic story is not that uncommon and is emotionally draining. The thoughtful film was, nevertheless, as dull as Sally; she was used more as a conceit than to develop her character. Though to its credit, Not Wanted was daring for its time to even broach this taboo subject. 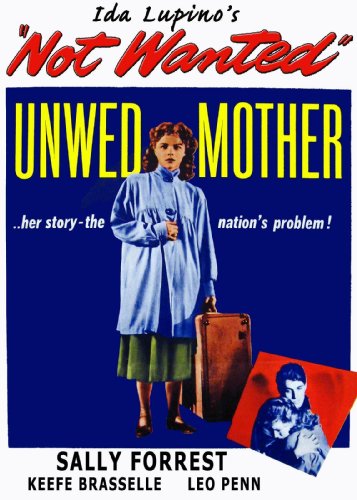