Tarkovsky in his book, “Sculpting in Time,“mentions that he wanted to make a film aboutRussian nostalgia — “about that state of mind peculiar to our nation which affects Russians who are far from their native land. I wanted the film to be about the fatal attachment of Russians to their national roots, an attachment which they will carry with them for their entire lives, regardless of where destiny may fling them. How could I have imagined as I was making this film that the stifling sense of longing that fills the screen was to become my lot for the rest of my life; that from now until the end of my days I would bear the painful malady within myself?”

The filmmaker himself was pleased with the film and felt it was a part of his life’s beliefs. I believe this film ranks as one of his best works, an intriguing masterpiece, that is equal to if not better than his other masterpieces: Solaris, Andrei Rublyov, The Sacrifice,and Mirror.

This is the dreamlike tale of a Russian poet (Oleg Jankovsky) who is on assignment in Italy’s Tuscany area to write a book about an obscure 17th-century Russian composer, Sosnovsky. He studied music in Bologna when his benevolent landowner sent him there, believing he was immensely talented. He was able to live in Italy for a while composing, but he soon returned to Russia voluntarily to face enslavement as a serf, evidently feeling that he would rather be a slave in the country he loved than a free man in a country he did not understand. Something must have gone wrong, because soon after his return he hung himself. How to understand that is puzzling to Oleg who is deeply plagued himself with family problems and deeply ensconced in a brooding type of meditation, which is definitely not Buddhist like. He is in a state of disorientation, as he tries to discover who he is.

The film opens in a deep fog, as Oleg and his Rubenesque Italian translator (DomizianaGiordano) drive in the sloping mountainous terrain to visit one of the shrines that mostly women tourists visit when they pray to the Virgin Mary. This opening scene is shot in black-and-white until the translator enters the church, and then it is shot in a magnificent sepia and pastel coloring. The visual images of all the scarved peasant ladies holding up lit candles and of the starlings coming out of the Virgin’s body are, indeed, startling. Tarkovsky will use the black-and-white shots again in the film when he is using flashbacks to show that he is dreaming or reflecting back on the events in his life.

The first impression one gets is that Oleg is having an affair with his translator; but, that is not the case, he is so obsessed with his thoughts that he has difficulty communicating with her. This is frustrating, as she expects something to happen between them; and, when nothing happens, she blames it on her poor luck of always choosing the wrong man. The mood of the film is gloomy, when a laugh is heard or someone does something silly it is monumental and takes on an unreal scope of importance. The feeling one gets is that the poet is like a child who is saddened by the outside world but is nevertheless able to laugh at something he makes up, and thereby is able to feel good about himself. When Giordano is asked by the sacristan “Whether she has come to pray to have a child, or to not have one,” she says, “She is just looking.” The sacristan’s response is, “What are you here for, then?” The implication being that a woman’s duty is to raise kids. But what is even eerier than her evasive response is that Oleg, who insisted on coming here, chooses not to even go inside the church. It would seem that he is making a statement to the effect that he suddenly realizes, amidst such a religious setting, that what he wants to find is not outside of himself. Oleg cannot be a tourist anymore; he must look inside himself to find what he is looking for.

Oleg meets his kindred spirit in a madman, a former math teacher (Erland Josephson), with gloom and doom prophesies. Erland had locked his family in the house for seven years for their own safety before someone breaks the door down and they escape; and, as one guest in the luxurious hotel Oleg is staying at says: “the child runs out of there like a rat from his cage.” These two madmen hit it off, they see something in each other that is akin in spirit. At first Erland is reluctant to talk about what he did but when Oleg pursues him to his house, which is damaged and flooded from a leaky roof, their conversation becomes animated and surrealistic. Both recognize in each other that they are possessed to do what it is they seem compelled to do and nothing can stop them. When Erland gives a prophetic speech in Rome and then torches himself to death to the accompaniment of music as his parishioners stand impassively by, only his dog shows feelings for what is happening to him. His suicide is a harsh opinion on orthodox religion’s failing role in getting him to alleviate his suffering, and is also a comment on how one’s passions could get carried away in a dangerous manner. The lesson seems to be that it is quite necessary that we learn for ourselves how to be humble before we relate to God, otherwise there can be no proper cure for our disease.

The truest lines are spoken by the madman Erland. The poet is inarticulate, taken aback by his memories and loss of spirit. All the other people Oleg meets on this journey, he forms only an allegorical relationship with — whether it’s the translator, or churchmen, or hotel guests, or the Italian workers. They all have little to say to him. They are simply not prepared to talk about what they do not fully comprehend.

For Tarkovsky this film is a lifetime journey made by someone who is in pain and must see this pain through for what it is, because there is no going ahead without taking this pain with him. He must also be prepared to take care of his spiritual obligations. This film is a projection of Tarkovsky as Oleg, as both actor and filmmaker envision their life passing before them. In anguish, Oleg sees his faith being tested. He starts to take hold of his fragile life, maybe for the first time in his long life, and he seems like a changed person who recognizes his melancholy to be a death wish something that poetically inspires him.

Things do not seem so foreign to Oleg, anymore. Oleg knows now that he can travel anywhere in the world without a translator. He lights the candles in the holy water at the hotel and carries out the promise he made to Erland. The flames are important reminders about what he must do to cleanse himself, as he takes the lit candles over the baths in his cupped hands. He believes they can burn away the core of the material world and give himself hope for purity and an eternal life. The film ends in light, as through the open circular window of a ruined church the sun shines in; and, metaphorically Erland’s house is transposed in it, symbolizing his divided state. As Oleg begins to meditate, he sees himself whole again and knows that he will return to his native Russia that he loves so dearly, that Russia is inside his blood; and, he knows for certain, now, that his Russian roots will be there for him, forever, wherever he goes. 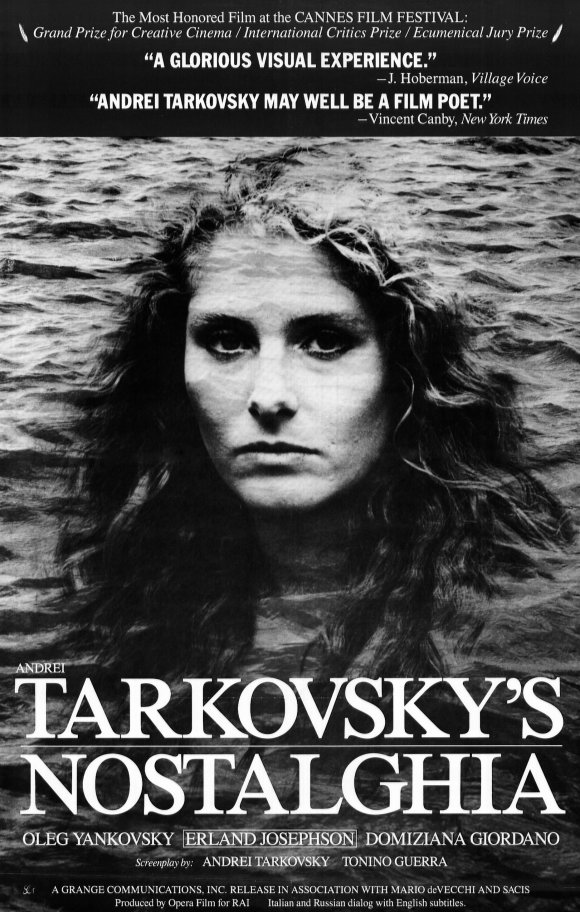