The crime thriller with occult implications is based on the 1971 best-selling novel by former actor Tom Tyron (starred in The Cardinal), who adapts his own story to the screen. It was well-regarded as a ghost-story chiller when first released, but its star quality has lost its shine over the subsequent years for being so pretentious and nostalgic. Director Robert Mulligan (“Fear Strikes Out”/”To Kill a Mockingbird”/”Inside Daisy Clover”)creates a disturbing moody atmospheric piece and ratchets up the tension over the conflicts of twins, Niles and Holland Perry (Chris and Martin Udvarnoky, who are 10-year-olds), over good and evil.

It’s set in the summer of 1935, on a Connecticut farm, in the rural town of Pequot Landing, where playful adolescent twins, the outgoing Niles and the introverted Holland Perry live with their ailing recently widowed mom Alexandra (Diana Muldaur), loving Russian grandmother Ada (Uta Hagen, acting debut of famous acting teacher) and extended family in a close-knit community. Holland is portrayed as the bad child, while Niles is the angelic-looking child loved by everyone. Alexandra’s hubby was accidently killed in March when the basement trapdoor fell on his head.

More accidents around the estate grounds start happening after Holland possesses the signet ring handed down from his grandfather to his father, who was buried with the ring. The accidents include a loner neighbor, Mrs. Rowe (Portia Nelson), dying of a heart attack that unknown to the authorities was brought on by Holland pulling a rat out of his hat in a magic trick. Also the twin’s mom is said to have fallen down the stairs and become paralyzed, but in reality was pushed down the stairs by her boy when told to give back the ring. It comes to a startling end, when a baby from the tragedy-ridden extended family is found in the basement drowned in a wine casket.

The strange behavior of Niles can be blamed on the slow-witted granny, who teaches him a game whereby he imagines he’s another creature and can empathize with that animal or human. But Niles is in a game-time mode all the time, and fails to acknowledge his twin brother is dead and that he’s responsible for all the bad deeds he blames on Holland. Granny tries to stop Niles from playing the game and to recognize that Holland is deceased, but has no luck. Too bad the well-intentioned but unobservant granny lived in a time when she didn’t have the means to figure out the kid had severe psychological problems and needed to see a shrink.

The diabolical story has its eerie moments, but skirts close to becoming too ridiculous to fathom. It can be praised more for style and craftsmanship than its literate but questionable story. 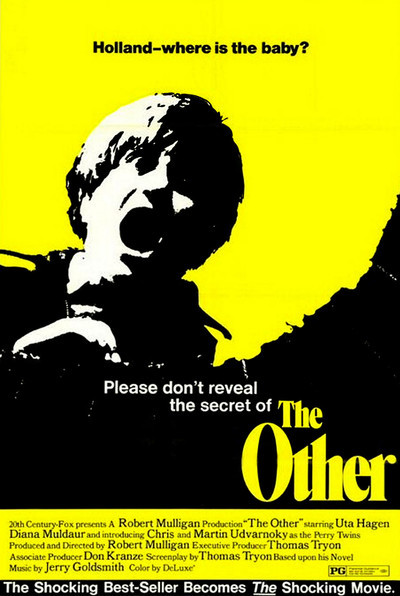