Writer-director Dagur Kári, in his feature length debut, presents a derivative quirky coming-of-age comedy/drama about an eccentric alienated albino 17-year-old, Noi (Tomas Lemarquis), that’s set in a remote village (Bolungarvik) among the fjords in Western Iceland. The lanky, loner, shaven-headed Noi lives with his elderly grandmother Lina and tries to make the best of his relationship with his alcoholic taxi driver father Kiddi, who lives apart. No mother is ever mentioned. Noi’s father does not want him to turn out to be a failure like him, but offers no constructive guidance to help straighten out his son’s lack of school success due to poor punctuality, discipline problems, not trying and truancy (preferring to stay in a secret reading room underground than attend boring classes). When Noi leaves a tape recorder as a substitute for attending class, the narrow-minded teacher threatens to resign unless Noi is expelled by the reluctant headmaster. The boy was IQ tested by a visiting city psychologist and found to be bright, in fact was called a “wonder kid” but, nevertheless, can’t find anything in this desolate village to get excited about and in an anti-social way chooses not to show his intelligence. Yearning to leave the oppressive, claustrophobic frozen tundra Noi begins an awkward relationship with gas station worker Iris (Elin Hansdottir), who got in trouble in the city and was sent to live here with her book dealer father Oskar–preferring girlie nude magazines to Kierkegaard. Noi dreams of escaping with Iris, but can’t come up with a satisfactory plan to convince her to leave with him. After Noi visits a fortune teller (Kjartan Bjargmundsson) upon his concerned grandmother’s urgings and receives a deadly warning about his fate, he tries to escape town through a bank robbery and to steal a car, failed efforts which are done in a serio-comic manner. Noi is rescued at last from his dilemma to escape from the snowbound town by an unwelcome apocalyptic ending, due to an ‘act of God’, that takes the starch out of any of the previous absurdist deadpan comic moments.

I was left puzzling over the resolution as to what it exactly means, which left me thinking that the filmmaker was probably using as his theme the previous quote from Kierkegaard’s Either/Or: “Hang yourself and you will regret it. Do not hang yourself and you will also regret it.” What it comes down to for Kári is that life is basically pointless no matter what one does. Aside from the sensitivity shown to the youth and the effective minimalist way the narrative unfolded, this moody melancholic offering left me too much in the cold to warm up to it. But, that’s not to say, I didn’t think it didn’t have its perceptive moments. It just seemed, in the end, to be taking us to a place that was too dark to take comfort in or feel intellectually satisfied by its ironic conclusion. 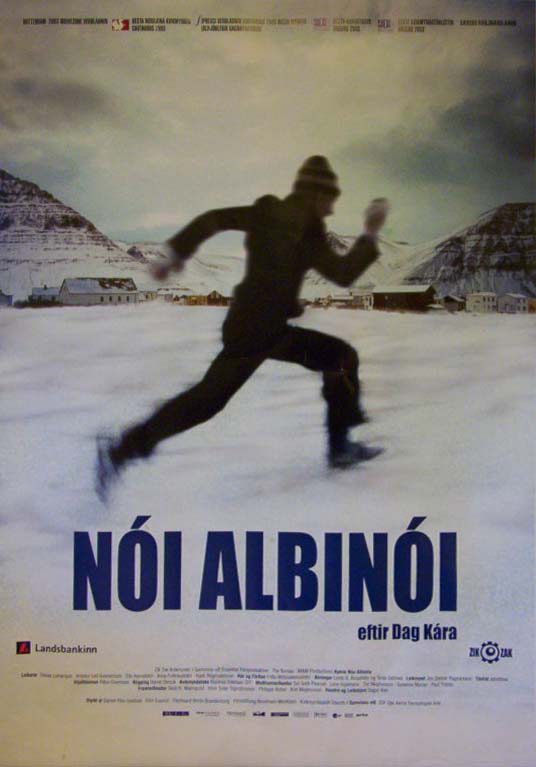