“The best line in the film is said by Scott after he fell into the outlaw’s trap: Hate makes a man careless.”

A lively oater directed with conviction by André de Toth. Thomas W. Blackburn does a good job keeping the script tight. It is adapted from the story “Riding Solo” by Kenneth Perkens. It’s routine but everyone does a decent acting job and the film looks better than it should.

Larry Delong (Randolph Scott) has taken a job as a shotgun rider on the stagecoach because he’s after a ruthless stagecoach hold-up gang who killed his sister and young boy. Larry wants to kill the gang leader Dan Marady (James Millican) and he figures the best way to do it is ride as a decoy to smoke him out.

The gang realizes that Larry is on the stage heading for Deep Water and decide to lead him into a trap. One of the outlaws rides into the stagecoach relay station and flashes Dan’s lucky hand-engraved derringer, and when Larry recognizes it he asks questions about Marady. The outlaw leads him into trap as he pretends to be taking Larry to see the dead body of Marady, instead the gang jumps him. The boss orders him killed but one of the outlaws, Pinto (Bronson), decides he wants to torture him instead and intends to kill him after the hold-up. They leave Larry hog-tied by a ravine and tell him they plan to shoot-up the stage he abandoned and therefore draw the tough sheriff and posse of Deep Water to follow his trail so that his gang would come into town and rob the local gambling casino without any resistance.

When Larry manages to get free himself and ride into Deep Water, he finds he’s too late to save the stage and that the driver Bob Pardee is killed and the passengers are critically injured. He feels the cold stares of the townies as they believe that he’s part of the gang and won’t listen to his explanation or believe him when he tells them Colonel Flynn’s The Bank Club will be robbed. They block him from leaving town by horse, even as he tells them that he wants to bring the sheriff back.

The deputy sheriff Tub Murphy (Wayne Morris) returns to town and tells Larry that the sheriff has ordered him locked up to wait for a trial. Meanwhile the cowardly town wants to lynch Larry as an outlaw, but no one has the guts to get into a shoot-out with him. Tub decides to wait him out by eating in the cafe, but this angers the leading town citizens who want Larry dead but are too cowardly to do it on their own. High Noon ran this same theme more effectively.

Randolph Scott must clear his name and stop the robbery. The only two in town who stick by Larry are his girlfriend Orissa Flynn (Joan Weldon), she’s the attractive daughter of the casino owner, and Dr. Winkler (James Bell).

The best line in the film is said by Scott after he fell into the outlaw’s trap: “Hate makes a man careless.” 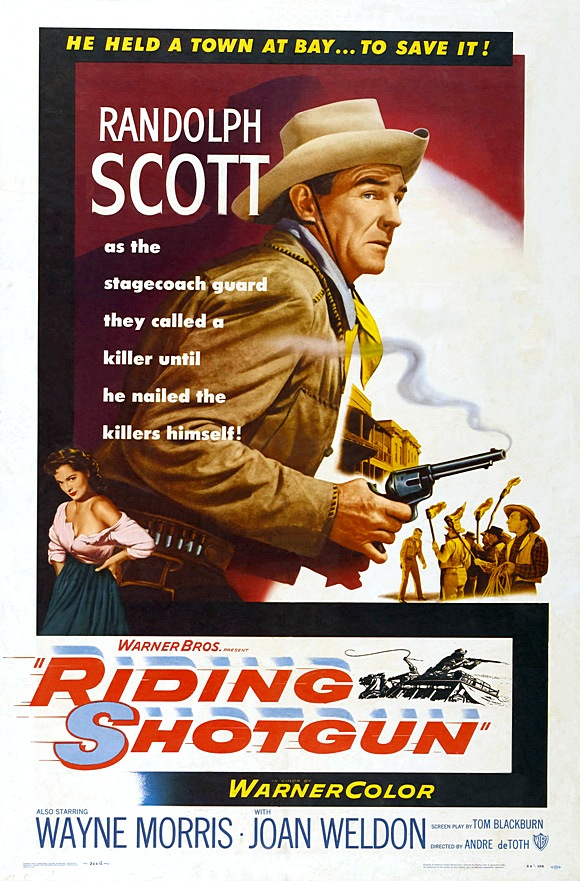