Gary Oldman makes his directorial debut in this gritty but bleak family domestic drama about a working-class family struggling with their inner demons. It is based on his violent memories of growing up impoverished and abused in the projects of southeast London, and is probably for the most part his true story. It’s an uncompromising drama honestly presenting the horrors of the human condition, that is messy and difficult to watch but rewarding for those who have the stomach for such unrelenting misery and who are easily satisfied with such in-your-face violence that offers no romanticized answers. Oldman dedicated the film “in memory of my father.” He does take the high road and neither demonizes the abuser nor deifies the victim, but he nevertheless blames dad for his violent behavior and for becoming so screwed up and addicted to drugs. Kathy Burke won Best Actress honors at the 1997 Cannes Film Festival. She played Valerie, the long-suffering wife of the unstable and violent unemployed alcoholic husband Ray (Winstone), who beats the stuffing out of her in the film’s most graphic moment. I understand the boot stomping beating was not factual, but in the film it’s what is remembered most about the vicious nature of the father. The self-pitying Ray also threatens to beat Valerie’s useless junkie brother (Charlie Creed-Miles).

Nil By Mouth is more than a movie about impossible suffering, it’s about the human spirit to survive and get back on one’s feet with dignity after such a tragedy by finding one’s inner strength. After this horrendous beating, the women of the family bond and stick together to meet their fate and provide the film with a special kind of vitality.

This grim family portrait shows a realistic slice of lower-class life: violence, drugs, petty crime, excessive drinking, and wife beating tie this downbeat story together. It is told in a matter-of-fact style, with no moralizing or pulling of punches. The only problem is, as good as the acting is, it is tough to spend over two hours with these people and not feel maudlin. One of the most poignant shots is when the four generations of women are huddled together in fear, as the wife-beating husband Ray tries to see the wife he has just smacked around. There is an inner strength these women have that is precious. It is the best thing about this violent tale since it doesn’t have more to say than what is obvious–that very few escape this vicious cycle of violence.

The title comes from a hospital warning not to give the patient food. 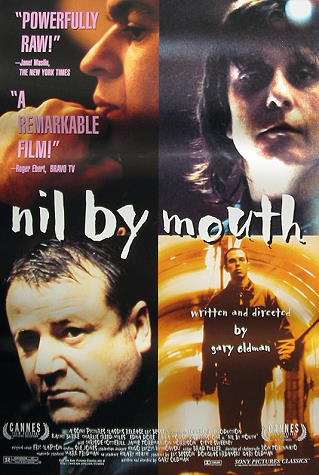