“Like all Greenaway films, it’s not for all tastes.“

Cinema provocateur Peter Greenaway (“8 1/2 Women”/”Prospero’s Books”/”The Belly of an Architect”) directs this visually pleasing highly personal biopic of the Dutch painter Rembrandt (Martin Freeman) that also can be viewed as an oddball art history lesson involving a murder plot (with Greenaway playing fast and loose with the facts to give us a look into the troubled mind of the painter who must face his critics, as he offers groundbreaking art). It focuses on 1642, when the painter goes from a wealthy respected painter to a discredited pauper. Following his nagging pregnant wife Saskia’s (Eva Birthistle) advice, the reluctant Rembrandt takes on the large commission to paint the Amsterdam Musketeer Militia in a group portrait of the 18 that would later become known as The Night Watch and become his masterpiece.

While painting, the artist discovers a murder plot involving his egotistical bigwig subjects he was called on to flatter in this portrait and becomes determined to expose the conspiracy. Rembrandt builds his accusation in the form of his painting, following through on his decision to uncover the seamy and hypocritical side to Dutch Society in the Golden Age. But his good fortunes change as Saskia dies. Meanwhile Rembrandt builds his case for the murder plot involving conflict over finances among his arrogant subjects, but the conspirators plan revenge and discredit him by planting a caretaker, Geertje (Jodhi May), to seduce him and become his mistress. They further diabolically plan his social and financial ruin, and succeed into driving him into poverty, insult his young mistress Hendrickje (Emily Holmes), conspire to destroy his son, and eventually bring Rembrandt to ruin.

The film is shot for the most part from around the artist’s bed, and the opulent richly colored film looks as if it were a canvas being painted. It’s an exotic look at the mystery behind Rembrand’s famous painting, and should be pleasing to Greenaway fans. But like all Greenaway films, it’s not for all tastes. Be warned that Greenaway’s take on the painting is interesting but questionable. 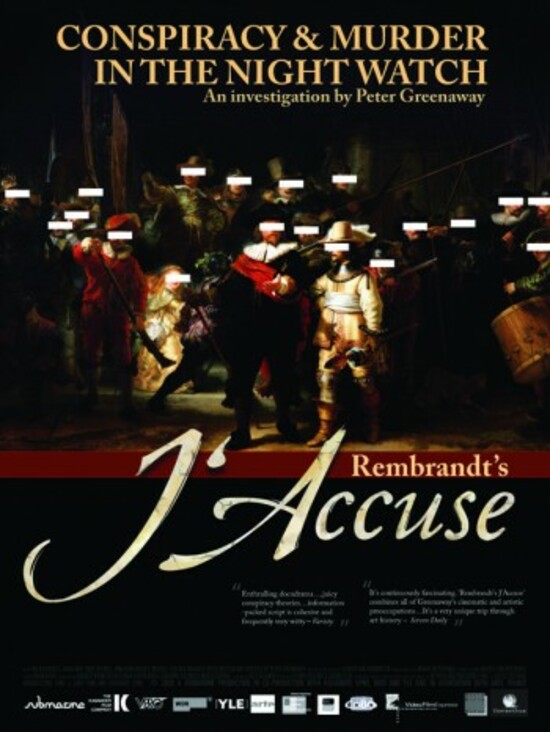